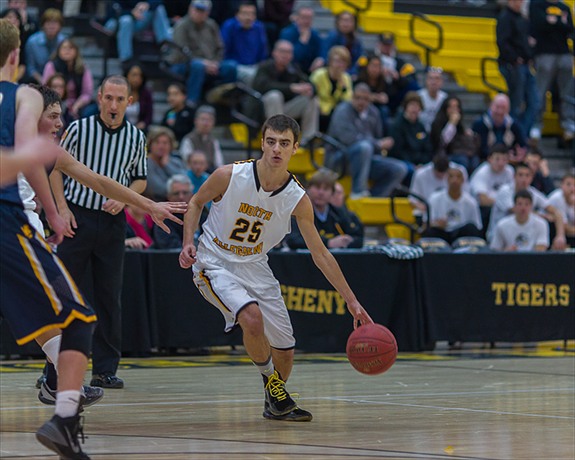 North Allegheny trailed by four points entering the fourth quarter, but the Tigers unleashed a 33 point explosion in the final period for an 80-70 victory over the Gateway Gators in the championship game at the Gateway Classic on Saturday night. NA struggled in the first half, hitting just 25 percent from the field while Gateway connected at a 70 percent clip for a 34-31 lead.  The Gators Delvon Randall scored a game-high 33 points and knocked down 11 of 14 from the field and 10 of 11 from the free-throw line.

However, the Tigers caught fire in the second half and utilized a pressure defense that forced 21 Gateway turnovers. Senior David Haus collected three steals for the Tigers and posted a double-double with 14 points and 10 rebounds. Aiding in the comeback effort was senior Joe Mancini who scored a team-high 18 points on six three-pointers. Three other Tigers posted double digits as Cole Constantino notched 14 points, Elijah Zeise netted 13, and Luke Gwaltney added a dozen points.  Outscoring Gateway 33-19 in the final quarter, North Allegheny managed the ten point win.

North Allegheny runs their winning streak to nine straight and owns a 9-0 overall mark with the tournament title win. Gateway drops to 7-3 on the season with the loss. The Tigers return to section play to begin the New Year with a home meeting with the Butler Golden Tornado. Tip-off is slated for 7:30 pm.  The contest will be broadcast live via the internet on the North Allegheny Sports Network.