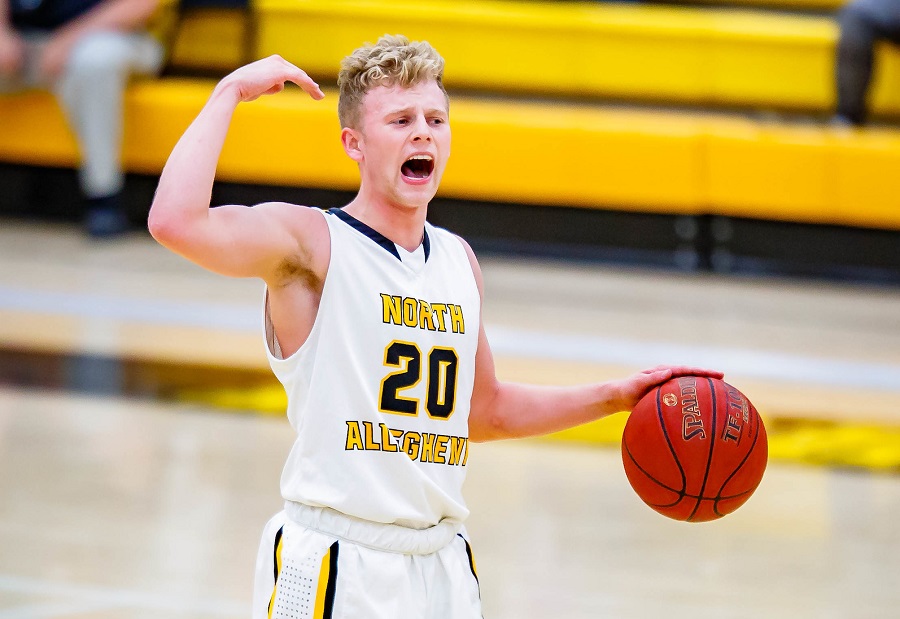 The Butler Golden Tornado rallied from a 13-point deficit in the second half to escape North Allegheny with a 58-56 overtime win on Friday night. The Tigers, who were playing without starters Curtis Aiken and Zach Johnson, had Butler on the ropes for most of the night and played valiantly in a hard-fought contest.

Senior Ray Sandherr led the Tigers in scoring with 19 points and helped NA build a 45-32 lead by the late stages of the third quarter. Sophomore Mike Iuzillino played a prominent role in North Allegheny’s success as well and tallied 14 points, including 12 points in the second half. Getting the start at point guard, Iuzillino knocked down 3 of 5 attempts from beyond the arc and also corralled seven rebounds. For his effort, Iuzillino was selected as the Wright Automotive Player of the Game.

Junior Walker Davidson also saw time at the point and chipped in with seven points and knocked down 2 of 3 attempts from the perimeter.

Butler was paced by senior guard Luke Michalek who kept the Golden Tornado within striking distance with a team-high 19 points and four 3-pointers. While Michalek kept the GT’s afloat, freshman guard Mattix Clement brought them all the way back in the fourth quarter on 5 of 7 shooting from beyond the arc. Clement scored 12 points in the second half on his way to a 15-point night and knocked down a trey with 3:30 remaining in the game for a 51-50 lead.

North Allegheny managed to tie the contest at 51-51 on a free throw by Iuzillino with 2:23 left to play. The Tigers had a chance to win the game on the final possession of the fourth quarter but a fadeaway jumper from the baseline by Sandherr missed its mark and the game went to overtime.

In the extra session, Butler broke a 56-56 tie when point guard Ethan Morton scored what proved to be the game-winning bucket on a layup with 37 seconds on the clock. It was a relatively quiet night for Morton, a Division I recruit, who scored 12 points on 5 of 19 shooting and committed six turnovers. Morton was hampered by a terrific defensive performance from junior Anthony Hattrup who matched up with the Butler guard most of the night.

With a chance to tie or take the lead in the waning seconds, the Tigers franticly tried to get off a clean shot but was denied by the Golden Tornado defense as Butler held on, 58-56. It was overall a strong and cohesive performance by NA, however the Tigers did suffer from a frustrating night at the free-throw line and connected on just 6 of 17 from the charity stripe.

Butler improves to 9-1 on the season and 3-1 in Section 1-6A. North Allegheny slips to 2-6 overall and 0-3 in the section. The Tigers will visit first-place Central Catholic on Tuesday night at 7:30 p.m.