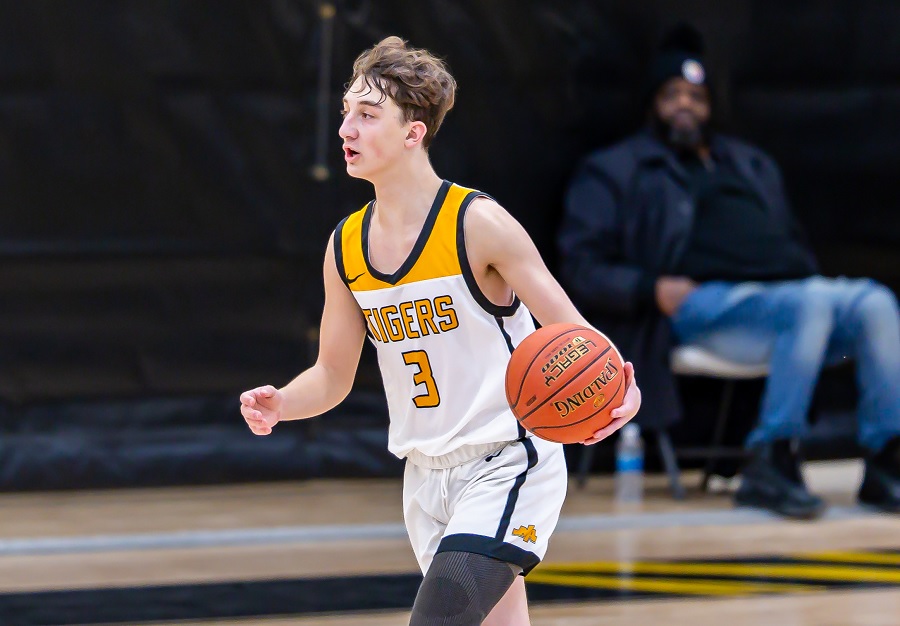 In a hard-fought game against the No. 1-ranked team in Class 5A, the North Allegheny boys’ basketball team fell by a 59-53 decision to the Penn Hills Indians in a non-section game at UPMC Court.

Coming off an upset win over Class 6A’s top-ranked team, Central Catholic, on Tuesday night, the Tigers were trying to make it two straight victories this week against a No. 1-ranked foe. However, Penn Hills opened the night with an immediate 3-pointer by Quinnipiac University commit Daemar Kelly to spark a 7-0 lead for the visitors in the first three minutes of the game.

Despite Penn Hills’ opening salvo, North Allegheny shot back and cut the deficit to one point by the end of the first quarter, trailing by a 13-12 score. The Tigers continued to claw back in the second quarter and took advantage when Kelly accumulated four fouls, forcing him to sit for most of the period. Trailing 15-12, NA capitalized with a 9-0 run to grab a 21-15 lead. The Tigers took a 31-24 lead into the locker room at halftime thanks to the hot shooting and crisp passing of Anthony Sciote. The junior point guard scored 13 of his team-high 17 points in the first half, including three 3-pointers. For his efforts, Sciote was selected as the Wright Automotive Player of the Game by the North Allegheny Sports Network.

In the second half, a rebound and put back by Ty Iwanonkiw extended the North Allegheny lead to 40-30 with 3:37 left in the third period. While the Tigers held their largest lead of the night, the pendulum swung in the other direction when the Indians employed a pressure defense that forced several NA turnovers and sparked a 19-2 run stretching to the midway point of the fourth quarter. The tide-turning run gave Penn Hills a 49-42 advantage and was keyed by senior point guard Noah Barren, who finished with a game-high 32-point night. Barren netted 23 of his points in the second half was nearly perfect from the free-throw line. After missing his first shot, Barren made 14 in a row from the charity stripe.

In the final four minutes of the game, the Tigers fought valiantly but were unable to rally back in what proved to be a 59-53 non-section loss. Along with Sciote, three others finished in double figure for NA. Iwanonkiw totaled 13 points, junior Joe Marquis added 11 points and junior forward Joey Dopirak chipped in with 10 points.

Following the loss, North Allegheny falls to 5-8 on the season, while Penn Hills improves to 10-2 overall. The Tigers will be back in action on Saturday night against Grove City at 6:30 p.m. The game will be broadcast live by the North Allegheny Sports Network.