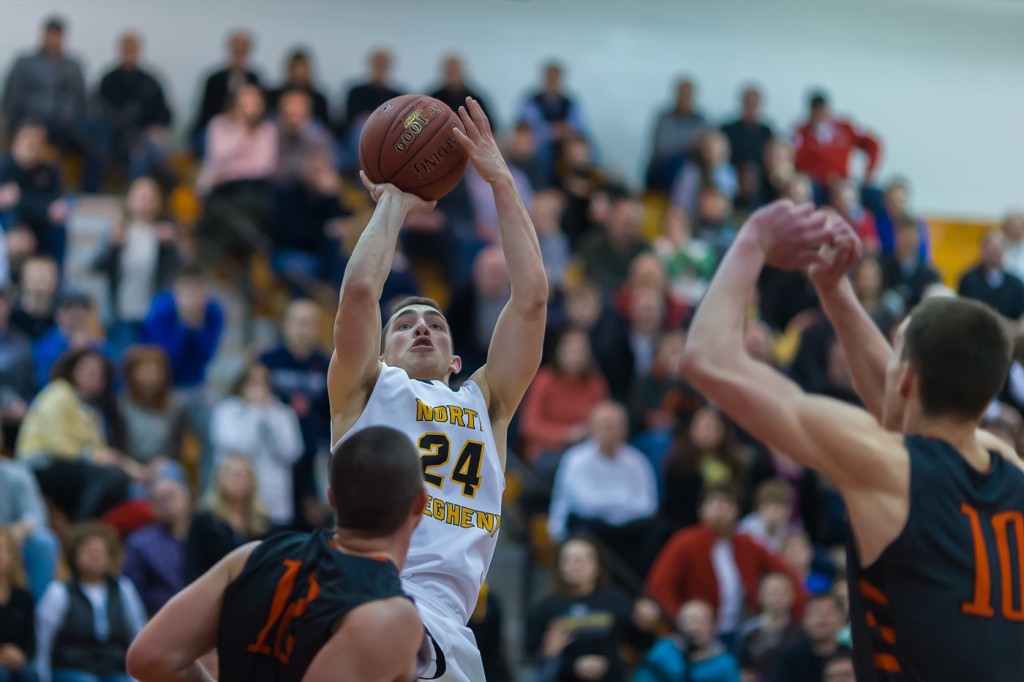 Senior Cole Constantino lofted a short range shot over the outstretched arms of Bethel Park’s 6-6 junior Jacob Dixon for a game winning bucket and the North Allegheny Tigers outlasted the ninth-seeded Black Hawks for a 65-63 victory in the WPIAL quarterfinals.  Constantino netted a game-high 26 points and his final shot with 1.7 seconds remaining helped lift the Tigers to victory. Following the Constantino bucket, Bethel Park put the ball in the hands of their top scorer, senior Joey Mascaro, but NA forward Jordan Lake swatted his 3-point attempt from the left corner as time ran out.

From the start, Bethel Park was intent in pushing the top-seeded Tigers to the limit and took a 10-6 lead in the opening period.  However, North Allegheny went on a 15-0 run to take a 21-10 lead in the early stages of the second quarter. The Tigers advantage swelled to 12 points just before halftime when freshman Curtis Aiken poured in a 3-pointer from the right corner to give NA a 39-27 lead. Bethel Park trimmed the score to 39-30 on a desperation buzzer beater before intermission by Josh Duda that banked in from 3-point range.

Bethel Park hit another buzzer beater to end the third quarter on a 3-point shot by junior Chance Wright to trim the score to 51-47, Tigers. The Black Hawks came all the way back late in the fourth quarter on a Mascaro trey from the left corner that tied the score at 63-63 with a little over a minute to play. Bethel Park buried 5 of 8 attempts from beyond the arc in the second half. Mascaro finished with a team-high 23 points, followed by junior Levi Metheny’s 13-point effort.

With the game tied for the first time since the first quarter, North Allegheny ate up most of the remaining minute to set up a Constantino shot in the waning seconds.  Constantino, who delivered several important buckets in the fourth quarter, came through again with the go-ahead shot with 1.7 seconds remaining to put NA in front, 65-63. For his heroic shot, Constantino was named the Wright Automotive Player of the Game. 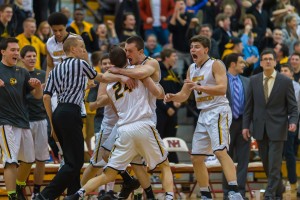 Bethel Park tossed a deep inbounds pass that was tipped out of bounds by junior Keegan Phillips in the Black Hawk’s forecourt with 1.1 seconds to go.  From the same spot where Mascaro tied the game a minute earlier, his 3-point attempt to win it in the final second was denied by Lake who emphatically swatted away Bethel Park’s hopes at a third buzzer beater in the game.

Along with Constantino’s big night, Lake’s efforts were pivotal to the win as he won his head-to-head matchup with Bethel’s Park big man, Dixon. Lake ended the night with eight points, seven rebounds and three blocks.

Winners of eight games in a row, North Allegheny improves to 22-2 and advances to the WPIAL semifinals for the third straight season. The Tigers will face the 12th-seeded Fox Chapel Foxes who upended the fourth-seeded Hempfield Spartans, 44-39. Bethel Park, meanwhile, falls to 16-8 overall and will play the Hempfield Spartans tonight in the PIAA play-in bracket.

For a photo gallery of NA’s win over Bethel Park by photographer J.J. LaBella, click here. For an archived broadcast of the game on the North Allegheny Sports Network, click here.