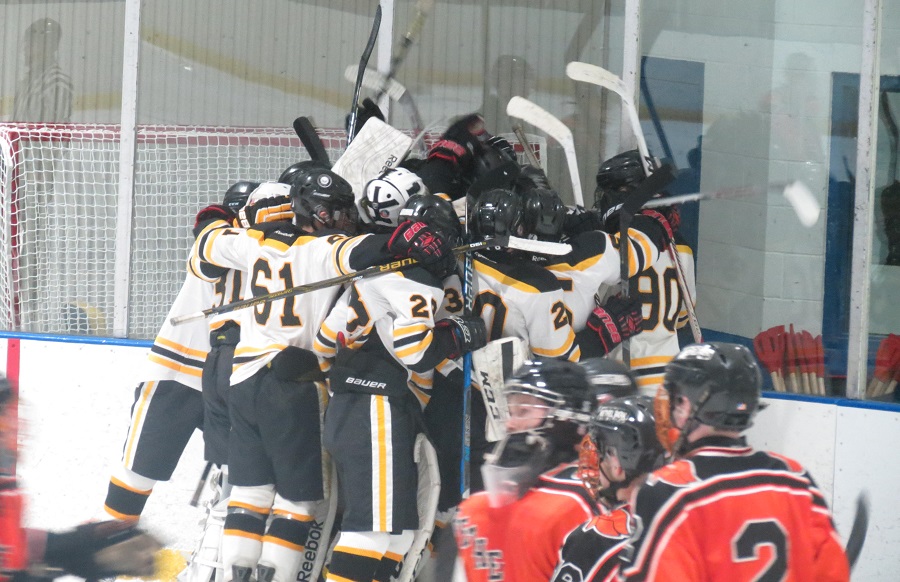 Mirroring a thrilling playoff finish from last season, the North Allegheny ice hockey team defeated the Bethel Park Black Hawks in the PIHL quarterfinals with a 3-2 overtime win on Thursday night at the Baierl Ice Complex. A year ago, it was Dawson Richard who scored the game-winning goal to end the Black Hawks season with a 3-2 victory in overtime. This time it was senior Erik Chidester who delivered the game-winning marker to advance to the Tigers to the PIHL semifinals next week.  Three of the last four playoff meetings between North Allegheny and Bethel Park have been decided in overtime.

Entering this PIHL quarterfinal contest, North Allegheny boasted the top scoring defense in Class AAA, allowing a paltry 47 goals on the season. Bethel Park was making its 26th consecutive playoff appearance, also possessing a defensive-minded style of play. After one period of play, it was no surprise that the game was scoreless.

In the second period, North Allegheny capitalized on its third power play opportunity of the night and cashed in thanks to a goal by freshman Tyler Lamark, assisted by Justin Kidd and Steven Dietz, for a 1-0 lead with 10:13 remaining. Bethel Park tied the game at 1-1 with 5:16 left in the second period when Austin Read rifled a rebound past NA goalie Ryan Heil.  Heil ultimately made 28 saves and picked up the win in net for the Tigers.

Following intermission, the Black Hawks stunned the Tigers with a goal just 20 seconds into the third period for a 2-1 lead. Will Douds floated a puck toward the net from the blue line and Jason Bauer deflected the shot into the net to give BP the lead and momentum. Owning a one-goal advantage, Bethel Park packed in the defense but North Allegheny still managed to tie the game at 2-2 when Dietz centered up a beautiful back-hand pass from behind the net to John Parks in the slot who buried the puck with 5:53 remaining in the third period.  That set the stage for Chidester’s heroics in overtime that lifted NA to the 3-2 victory. For his efforts, Chidester was named the Wright Automotive Player of the Game.

With the win, North Allegheny advances to the PIHL semifinals where it’ll face the Peters Township Indians on Wednesday night at the RMU Island Sports Complex. Faceoff is set for 9:00 p.m. The game will be broadcast live via the internet on the North Allegheny Sports Network.