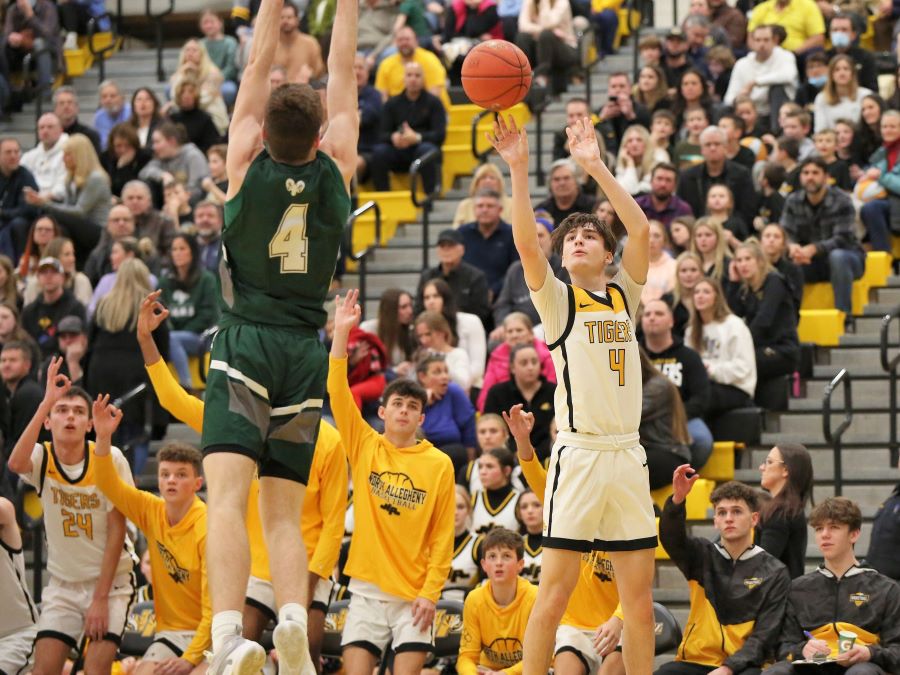 North Allegheny used a fast start and a strong finish to defeat the rival Pine-Richland Rams on Friday night, 57-40, in a Section 1-6A contest at UPMC Court. The victory was North Allegheny’s fourth in the last five games. It’s also the fifth time in the last six games that the Tigers have defeated the Rams in the head-to-head series.

Holding a distinct size advantage over the Rams, the Tigers capitalized on their height to the tune of a 13-4 lead after one quarter of play. In a well-balanced effort, seven different Tigers touched the scoresheet as NA built a 27-12 lead with one minute left in the second quarter. Junior guard Joe Marquis led the effort in the first half with eight points and a pair of 3-pointers. Marquis finished with 11 points and a trio of treys.

Despite North Allegheny’s early advantage, Pine-Richland chipped away and closed the gap to 29-25 in the third quarter on the strength of a 15-4 run. The PR run was capped on a 3-pointer by Josh Gimbel, which was the first of four treys for the senior guard. Gimbel totaled a game-high 22 points, scoring 18 in the second half.

While Gimbel developed the hot hand for the Rams, the Tigers turned to junior forward Joey Dopirak who sparked a 7-2 run to end the third quarter for a 36-27 lead. North Allegheny continued to pour it on from there and pulled away for a 57-40 victory. Dopirak scored 13 points in the second half and netted a team-best 20 points to earn Wright Automotive Player of the Game honors.

Joining Dopirak and Marquis in double figures was 6-11 junior Ty Iwanonkiw, who finished with 10 points and helped close out the victory with 4-for-4 shooting from the free-throw line in the fourth quarter. Eight of his 10 points came in the final stanza.

With the win, North Allegheny improves to 4-5 overall and 1-1 in Section 1-6A. Pine-Richland dips to 2-8 overall and 0-2 in the section. The Rams have now lost six in a row. The Tigers hope to continue their winning ways with a home game against Butler on Tuesday night at 8:00 p.m. The contest will be broadcast live by the North Allegheny Sports Network.