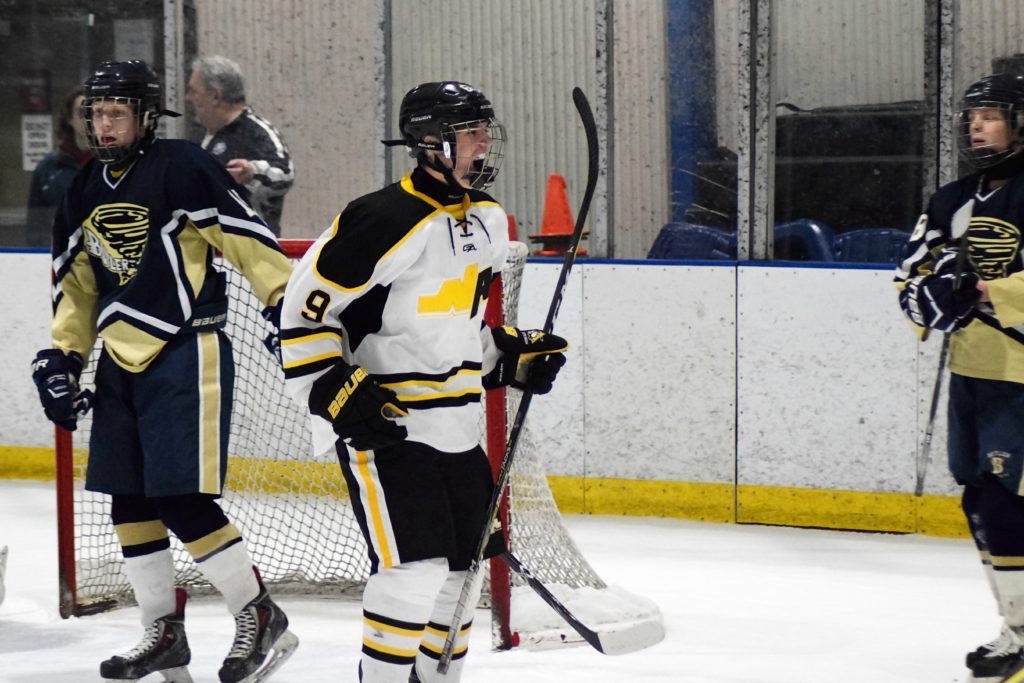 The North Allegheny ice hockey team punched its ticket to the PIHL Class AAA semifinals for the fourth straight season with an 8-3 triumph over Butler at the Baierl Ice Complex in Warrendale on Tuesday night. The Tigers pounced on the Golden Tornado with a five-goal first period and received a hat trick and an assist from junior Aaron Miller in the win. For his efforts, Miller was named the Wright Automotive Player of the Game by the North Allegheny Sports Network.

In the regular season, North Allegheny and Butler split the season series with each team earning a narrow one-goal victory at home. In the rubber match with a berth in the PIHL semifinals at stake, the Tigers made sure this playoff contest did not have nearly as much drama as their previous two meetings.

The Tigers stormed out of the gates against the Golden Tornado with an impressive first period. Sophomore Will Parreaguire opened the scoring with a marker at the 3:23 mark of the opening stanza, assisted by Justin Symons and Vincenzo Mazur. Butler had back-to-back power plays in the first period to try and even the score but instead the Golden Tornado fell further behind. Miller netted his first goal of the night with a breakaway goal against Butler keeper Connor Strobel for a 2-0 lead. The Miller goal was a shorthanded tally and was just the beginning of things to come.

At the 11:33 mark of the first period, Christopher Hanlon posted his first goal of the season to give the Tigers a 3-0 lead. Just 22 seconds later, sophomore Collin O’Neil netted his first goal of the year as well to bring the score to 4-0, North Allegheny. The Tigers ended the period with a highlight reel 2-on-1 goal by junior Haden Shimko, assisted by Tyler Lamark, for a 5-0 advantage with 37 seconds remaining in the period. The fifth NA goal forced the exit of Strobel, an all-star goalkeeper for the Golden Tornado this season.

Despite the change in-between the pipes for Butler, senior Nicholas Farmerie couldn’t prevent North Allegheny from expanding the lead to 6-0 courtesy of a power play goal by Hanlon 2:12 into the second period.

Refusing to go away quietly, Butler scored three of the next four goals to trim the NA lead to 7-3 by the end of the second period. The Golden Tornado rallied on goals by Ronan Miller, Bekk McClaine and Connor Bachman. The Tigers only goal in that span belonged to Aaron Miller, his second of the game.

In the third period, Miller notched the hat trick with a power play goal with 8:12 remaining in the game. The goal was the final of the night for either side, capping an 8-3 victory for North Allegheny. The third period was a penalty-filled session with three Butler players receiving 10-minute game misconduct penalties. The Butler penalties did not put a damper on what proved to be a thrilling victory for the black and gold. NA goalie Richard Karapandi earned the win in net with 33 saves.

The Tigers advance to the PIHL Class AAA semifinals where they’ll play Peters Township in a rematch of last year’s semifinal loss to the Indians. The game will be held at the RMU Island Sports Center on Thursday, March 15 at 7:15 p.m. The game will be broadcast live by the North Allegheny Sports Network.