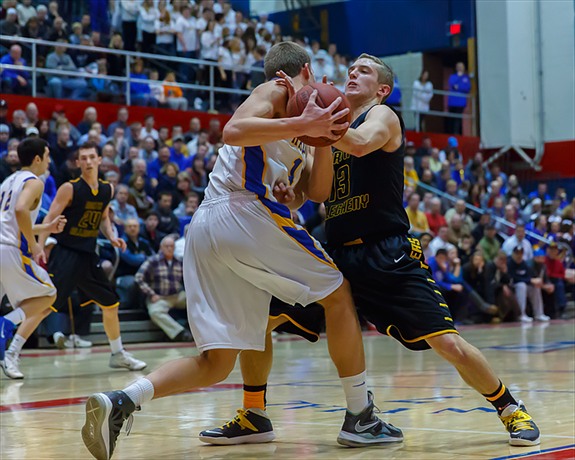 In the WPIAL semifinals on Wednesday night, the Hampton Talbots topped the North Allegheny Tigers by a final of 61-53 from Chartiers Valley High School. It’s the second straight year the Talbots have defeated the Tigers in the semifinals, which pits Hampton against New Castle in a WPIAL final for the third year in a row.  In 2012, the Talbots and Red Hurricanes met in the Class AAA title tilt.

Against the Tigers, Hampton used an 8-0 run in the first quarter to grab a 10-3 lead.  Senior Ryan Luther provided six of the points on the run and helped the Talbots maintain a solid lead throughout the remainder of the half with 18 points.  Leading by five in the waning seconds of the half, Ryan’s twin Collin Luther connected on a bucket-and-one opportunity to give the Talbots a 30-22 lead at intermission.  Of Hampton’s 30 points, the Luther brothers had accounted for 24 of them.

In the second half, the Tigers mounted a charge against their Section 3 rival.  Trailing 40-31, North Allegheny rolled off a 15-2 run and grabbed a 46-42 lead with 5:50 left in the game.  A streak of Tigers led the second half surge, including Cole Constantino who tied the game at 42-42 with a three-pointer near the end of the third. David Haus and Mike Carter scored four points each during the run, and senior Elijah Zeise provided six points, along with outstanding defense and rebounding as he was matched with Ryan Luther much of the night. In the second half, the Luther brothers combined for just 14 points.

However, those 14 points by the Luthers proved pivotal as the majority came on free-throws down the stretch. For the game, Ryan and Collin Luther were 15 of 18 from the charity stripe.  Collectively, the Talbots were 19 of 23.  The Tigers were 6 of 10 from the free-throw line, but three of those misses came on critical shots late in the game.

After the Tigers had taken a 46-42 lead, Hampton answered with a 12-2 run and put the game away at the free-throw line for a 61-53 win.  Ryan Luther finished with 25 points for the Talbots, David Huber netted 15 and Collin Luther scored 13.  For North Allegheny, Haus scored a team-high 14 points and Carter added 12. Of Haus’ 14 points, 12 came in the second half with the Tigers rallying in the final minutes of the game. While the comeback bid fell short, Haus’ typical all-around effort earned him Wright Automotive Player of the Game honors.

North Allegheny falls to 21-4 on the season and will continue on in the PIAA Tournament next week.  Hampton improves to 22-3 and will face New Castle in the WPIAL Championship on Saturday at the A.J. Palumbo Center.

For a photo gallery courtesy of J.J. LaBella, click here.