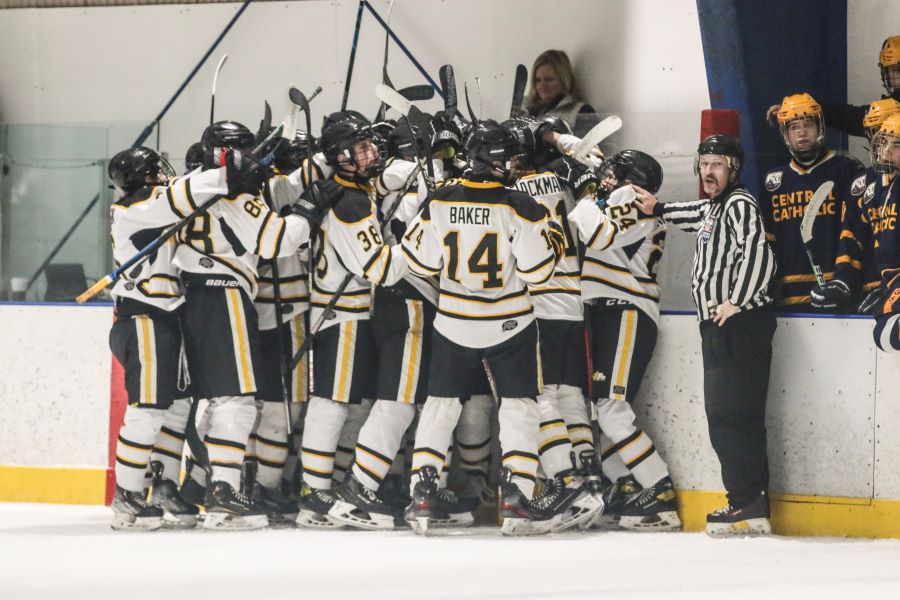 North Allegheny rallied from a 3-0 deficit for a thrilling 4-3 victory in overtime over the Central Catholic Vikings on Thursday night at the Baierl Ice Complex. Senior forward Matt Irvin netted the game-winner, his second of the night and fifth of the season, in the extra session to propel the Tigers to the victory.

In the early going, Central Catholic took a 1-0 lead with a goal by Noah Hritz at the 3:46 mark of the first period. The visiting Vikings increased their lead to 3-0 in the second period courtesy of goals by Griffin Lewis and Anthony D’Orazio.

Undaunted, the Tigers clawed back in the third period with a flurry of goals to draw even. Junior Evan Kerber got NA on the board with a goal at the 3:06 mark, trimming the deficit to 3-1. The Kerber goal was assisted by Matt Irvin and Evan Kaminski.

Just 16 seconds later, Irvin scored an unassisted goal to cut the score to 3-2, Vikings. With the Tigers back on the hunt, North Allegheny applied intense pressure in the remaining minutes and ultimately tied the game with just 46 seconds left on a goal by Evan Perrotte to knot the score at 3-3. Perrotte’s goal was assisted by Luke Walkauskas. 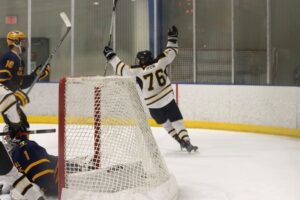 That set the stage for Irvin’s heroics in overtime, who cashed in on a breakaway goal with a minute left to lift the Tigers to a 4-3 win.

In net, senior Rylan Murphy earned the victory with 35 saves on the night. Central Catholic’s Jakob Dold made 32 saves in a losing effort.

North Allegheny improves to 8-2-1 overall on the season and climbs into a first-place tie with Seneca Valley in the Class AAA standings. Central Catholic slides to 6-3-1 following the loss. The Tigers will host Canon-McMillan on Monday at 9:00 p.m. The game will be broadcast live by the North Allegheny Sports Network.