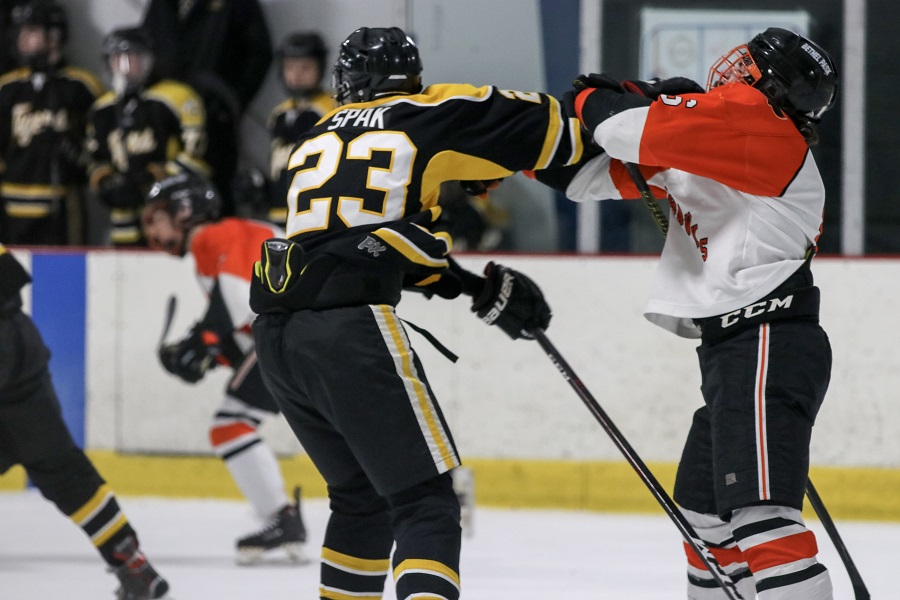 Atoning for an earlier loss to Bethel Park, the North Allegheny ice hockey team throttled the host Black Hawks on Thursday with a 7-1 triumph at the Spencer Family YMCA in the South Hills.

On February 22, the Tigers dropped a 4-1 decision to the Black Hawks. On Thursday night, North Allegheny exacted revenge in a heavily one-sided contest. NA outshot Bethel Park, 31-5, on the night.

Momentum was squarely with the black and gold from the opening face off as NA jumped on Bethel Park for a 2-0 lead in the first period. Junior Connor Chi netted the first marker at the 7:23 mark of the period, assisted by Nathan Spak, and junior Kyle Holmes scored an unassisted goal with just one second left in the stanza.

The Holmes goal was a backbreaker for Bethel Park and the NA avalanche continued in the second period. Aaron Mark, Trey Gallo and Matt Irvin all tallied goals in the second to improve the Tigers lead to 5-0.

The Tigers poured it on in the third period with two more goals, one from Cole Jackman and another by Irvin to finish off a 7-1 blowout. Bethel Park’s lone goal from Ben Guenther broke the shutout with 6:08 to play in regulation.

NA goalie Josh Bailey was rarely tested but made four saves to earn the win.

With the victory, North Allegheny improves to 11-3-2 overall and sits in a tie for third place with Peters Township in the Class AAA standings. Bethel Park drops to 7-11-1 on the season and remains in a three-way tie for sixth place. The Tigers return to action on Monday night with a “road game” against the Seneca Valley Raiders at the Baierl Ice Complex in Warrendale.