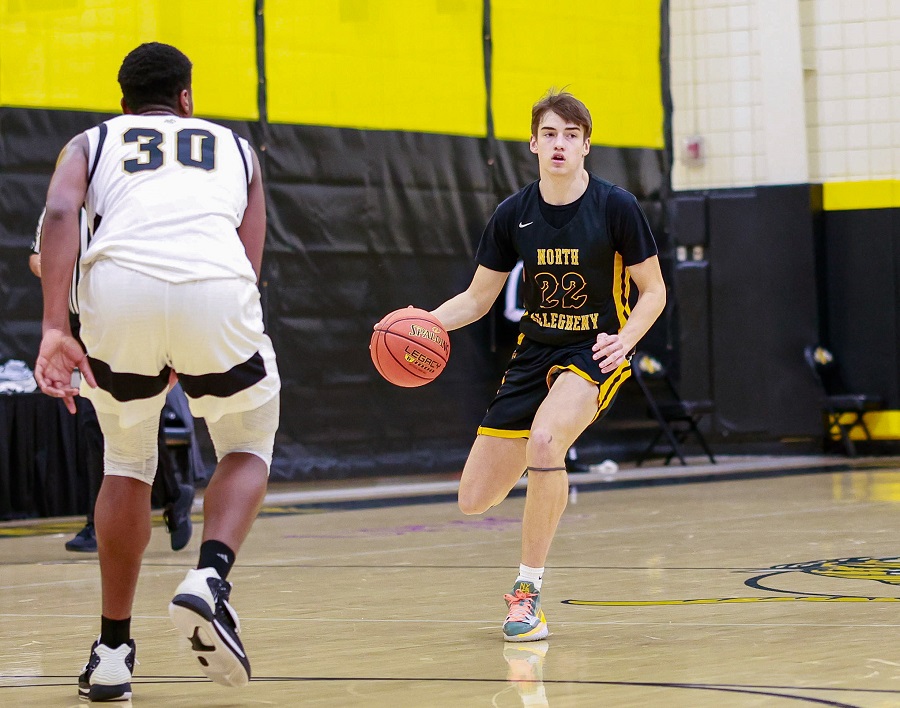 In day one of the Holiday Bash Winter Basketball Invitational, the North Allegheny boys’ basketball team rolled to a 74-44 non-section win over Imani Christian Academy on Monday night. The Tigers’ press defense forced numerous turnovers that led to easy transition buckets and a one-sided victory the third-ranked team in Class A. The win was North Allegheny’s seventh in a row to start the 2021-2022 season.

In the opening minute of the first quarter, senior forward Kolin Dinkins drove to the basket for a pair of layups and an immediate 4-0 lead. In a wire-to-wire victory for the Tigers, NA opened up an 18-7 lead in the first quarter thanks in part to three 3-pointers from senior guard Matt McDonough.

Things only got worse for the Saints in the second quarter, who were outscored 24-9 in the period. Courtesy of the second-quarter outburst, NA led 42-20 at intermission and McDonough scored 17 of his 19 points in the first half on his way to Wright Automotive Player of the Game honors.

Similar to the second period, North Allegheny poured it on the in third quarter, outscoring Imani Christian, 20-9, to invoke the mercy by the end of the stanza. Sophomore forward Joe Dopirak helped stretch the NA lead and finished with 15 points on the night. In all, 10 different Tigers touched the scoresheet in a complete team victory.

With the non-section win, North Allegheny improves to 7-0 overall, while Imani Christian dips to 4-3 on the season. The Tigers will take on Central Florida Christian on Thursday at Butler at 6:00 p.m. in day two of the Holiday Bash.