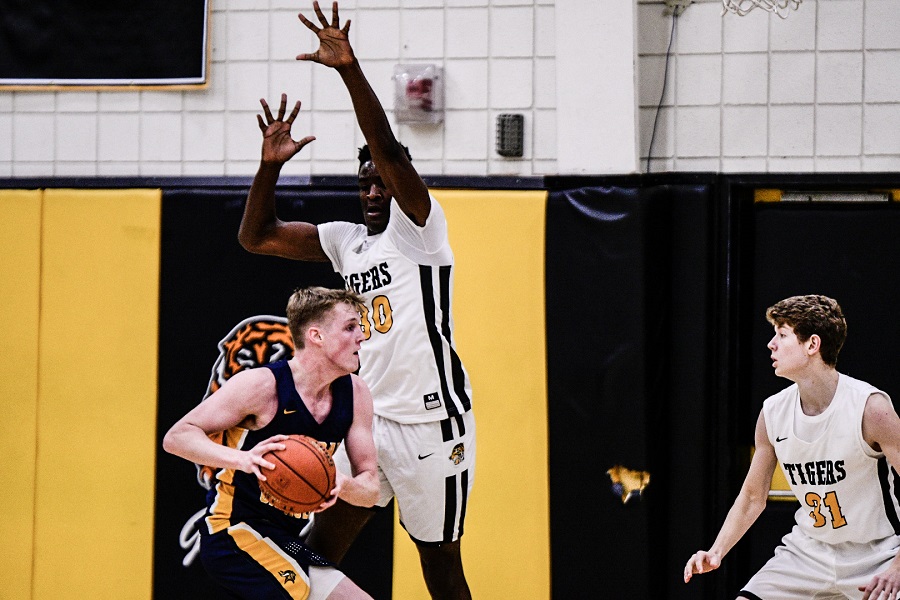 The North Allegheny boys’ basketball team started fast and finished strong to earn a 62-46 home win over the Central Catholic Vikings on Tuesday night. The Tigers limited the Vikings to 33-percent from the field and just 3 of 18 shooting from beyond the arc. NA also outrebounded Central Catholic, 28-20, in a terrific effort defensively and in the paint.

In the first quarter, Central Catholic grabbed a brief 8-6 lead on an Anderson Cynkar layup with three minutes remaining. The Vikings lead was short-lived as senior Zach Andreykovich buried a 3-pointer to put NA on top, 9-8. As it turned out, the Tigers would hold the lead for the remainder of the night.

North Allegheny used a balanced attack and a stingy defense to open up a 32-21 lead by halftime. The Tigers shot 49-percent (20 of 41) for the game.

The Tigers led 42-30 late in the third quarter before Jack Cherkas knocked down back-to-back 3-pointers to trim the score to 42-36 with 30 seconds to play in the period.

That was as close as Central Catholic would come as NA stretched out the lead in final stanza thanks to the rugged inside work of senior Grant Timmerson and junior Khalil Dinkins. Timmerson netted 14 points and Dinkins tallied a double-double with 12 points and 12 rebounds. For his efforts, Dinkins was named the Wright Automotive Player of the Game.

Also touching double figures for NA was senior Luke Colella with 14 points. Central Catholic was paced by senior Ben Sarson with 17 points. Sarson did his best to rally the Vikings, scoring 11 of his 17 points in the second half.