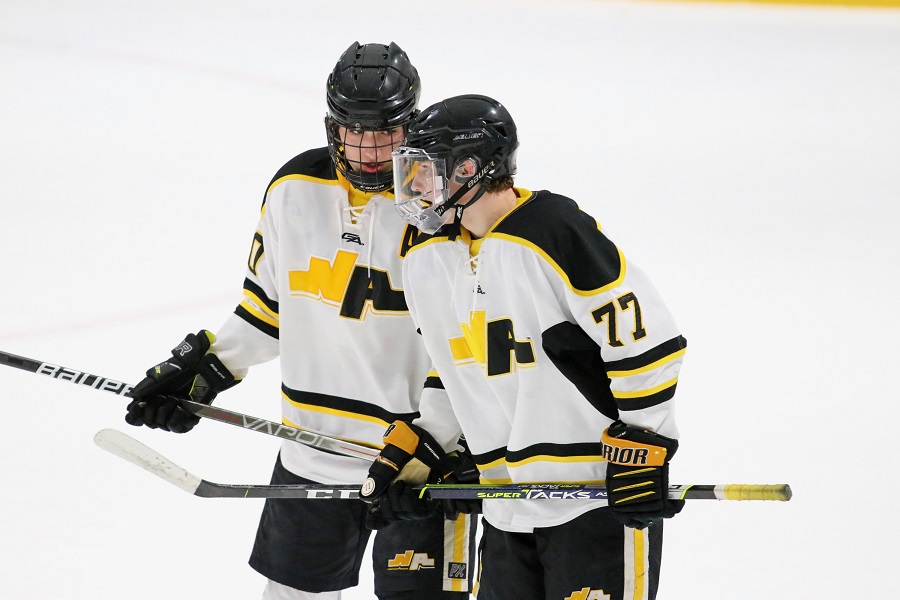 In a matchup featuring defending Penguins Cup champions, the Baldwin Fighting Highlanders scored a road victory over North Allegheny, defeating the Tigers 4-3 in a shootout at the Baierl Ice Complex in Warrendale.

Baldwin, last year’s 2A Penguins Cup and Pennsylvania Cup champion, scored first 1:44 into the game, when senior Carson Kress picked up a loose puck and fired a wrist shot past Andrew Long for his fifth goal of the season and a 1-0 lead. Senior Shane O’Neill tied the game for the Tigers when he took a lead pass from Luke Washabaugh and fired from the right wing to beat Eddie Nowicki far side at 7:37.

North Allegheny took its only lead of the night 1:41 into the second period. Patrick Buttignol and Evan Kaminski did the work below the goal line and fed the puck to Cole Jackman in the slot. The senior snapped a wrist shot home for his fourth goal of the season which gave the Tigers a 2-1 lead. But Baldwin answered less than a minute later. Tanner Plinta took a pass from Kress and slid the puck behind Long at 2:38 to tie the game at 2-2.

There were only two penalties called in regulation, both on North Allegheny, and Baldwin took advantage of one of those to take the lead. Senior captain Trevor Belak fired a shot from the left circle that hit something in front and deflected in to put Baldwin in front 3-2 at 12:14 of the third period. The goal was the fifth of the year for the Fighting Highlander defenseman, all coming with the man advantage. The Tigers did not have to wait long for the answer, and it came from their captain Connor Chi. Matt Irvin got the puck to Travis Lamark at the left point. Chi deflected his shot past Nowicki 40 seconds later for his ninth goal of the season and the score was tied at 3-3.

The Tigers got their only power play of the night with 1:06 remaining in overtime but they could not solve Nowicki, and the game headed to the shootout.

Xander Aul went first for Baldwin and beat Long with a wrist shot from the right wing that went in off the far post. Trey Gallo had the first attempt for NA, but his backhander was stopped at the near post by a left toe save from Nowicki. Plinta shot next for Baldwin, but the sophomore had trouble carrying the puck and was poke checked by Long. Chi shot next for North Allegheny and went with a wrist shot down low at the near post, but Nowicki stopped the attempt with a left pad save. The captain Belak was up next for Baldwin, and he went down the right wing and beat Long far side again of the post and Baldwin won the shootout (2-0) and gained the 4-3 road victory for the Fighting Highlanders.

Baldwin improved to 7-3-3 on the year after moving up to class 3A. The Tigers, the defending back-to-back 3A Penguins Cup champions, saw their record fall to 11-1-1 and the loss snapped a six-game winning streak for North Allegheny.

NA outshot Baldwin 41-15 on the night, but the senior Nowicki made 38-saves to get the win for Baldwin. The sophomore Long made 12-saves for North Allegheny and took his first loss (4-1) of the season.

Senior forward Cole Jackman, who gave the Tigers their only lead early in the second period, was chosen as the Wright Automotive Player of the Night for North Allegheny. The Tigers return to action Thursday night at the Baierl Ice Complex when they play host to rival Pine-Richland with a 9:00 face-off in a game that can be heard on the North Allegheny Sports Network.