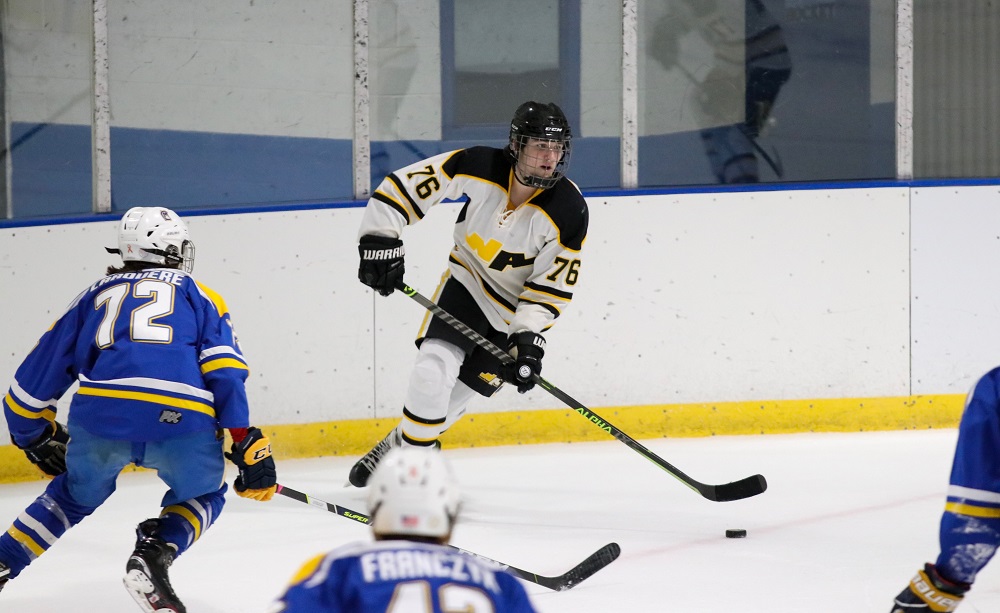 The Tigers came into the contest with a (2-0) record playing host to a Big Macs squad that was (0-3) and had scored just three goals on the season. So, it was surprising that Canon-McMillan controlled play during the first period and led 4-2, before the Tigers scored six unanswered goals to roll to an 8-4 win at the Baierl Ice Complex.

Canon-McMillan’s Anthony Petrillo got the scoring started by beating Rylan Murphy with a wrist shot at 5:13. But Connor Chi answered for North Allegheny steering a nice feed from Luke Washabaugh behind James Morgan on the backhand to tie the game at 1-1. But Zak Wilcox got behind the Tigers defense to score on a breakaway and the Big Macs regained the lead. The Tigers again had the response, when Nolan Colinaer took a pass from Matt Irvin behind the net to score his 3rd goal of the season to knot the score at 2-2. But Canon-McMillan’s senior captain Nick Price scored twice within ten seconds late in the first period to build their lead to 4-2.

North Allegheny went to work on the power play early in the second period and scored an early marker to turn the game around. It was Colinear’s second of the game off another Irvin assist at 3:27 that made the score 4-3. Irvin then found the net with his third of the year to tie the game. The junior forward took a pass from Owen Logan and came down the left wing on a two-on-one break. Irvin showed great patience moving from left to right and sliding home a backhander to even the score at 4-4. The eventual game winning goal came of the stick of Evan Kaminski shortly after that goal. Kaminski was able to gather a Trey Gallo rebound at the side of the net and put the puck past Morgan to give the Tigers their first lead of the game at 5-4. All told, North Allegheny scored those three goals in a span of 2:49 in the second period.

The final goal of that frame was vintage Connor Chi. Chi threw a check to cause a turnover in the left corner. The senior then dangled and danced his was around the boards before finding room again on the left wing and firing home a backhander to put NA up 6-4.

More from the Chi repertoire on the power play just 1:11 into the third period, as he snapped a wrist shot through traffic from the center point for his 4th goal of the season and a hat trick that put the Tigers up by three goals. Irvin finished out the scoring by tapping a Kaminski feed into an empty net for his second of the game and 4th of the season at 14:25.

North Allegheny finished the night 2-for-3 with the man advantage and killed off the only short-handed situation that they faced. Murphy, the junior goalie, made 21 saves to pick up his second straight win.

The Tigers are back in action with a road game at Baierl on Thursday night against Pine-Richland, before returning to action on the North Allegheny Sports Network on October 28th when they play host to Cathedral prep.