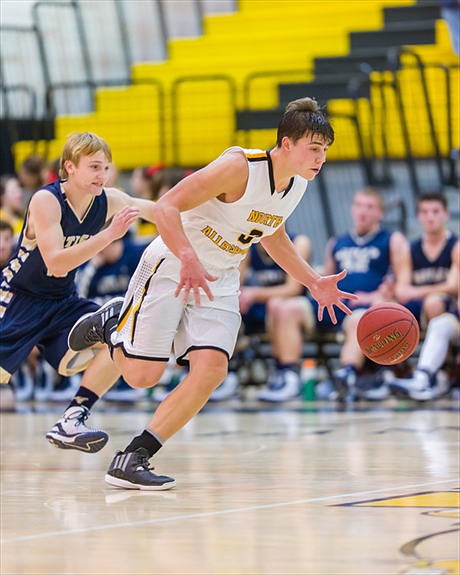 North Allegheny scored over 100 points for the first time in over three years as the Tigers dominated Westinghouse, 109-59, on the opening day of the Wright Automotive Holiday Tournament.  The last time the Tigers surpassed the century mark in a single-game was against Hazelton on December 9, 2011, in a 103-79 win at the State College Tip-Off tourney.

The Bulldogs took a 5-2 lead in the early stages of the game, but a 19-0 run by the Tigers took the spark out of Westinghouse.  The 19-0 run gave the Tigers a 21-5 lead in the first quarter and the rout was on. North Allegheny shot 55 percent from the field and 51 percent from beyond the arc (21 of 41), with four Tigers netting double digits.

Senior Cole Constantino scored a game-high 24 points, freshman Curtis Aiken tallied 14 points, junior Keegan Phillips scored 13 points and senior Will Sandherr poured in 10 more.  Scoring 13 points in 13 minutes during the most competitive phase of the game, Phillips was named the Wright Automotive Player of the Game.

Westinghouse was paced by senior Robert Williams who scored 16 points and pulled in nine rebounds.  In the first half, the Bulldogs were led by senior DeSonte White who scored 14 points for the evening and connected twice from beyond the arc.

North Allegheny improves to 9-0 overall while Westinghouse falls to 2-5 overall.  The Tigers face the Monessen Greyhounds tonight in the championship game of the Wright Automotive Holiday Tournament.  Tip-off is slated for 7:30 pm.  The game will be broadcast live via the internet on the North Allegheny Sports Network.