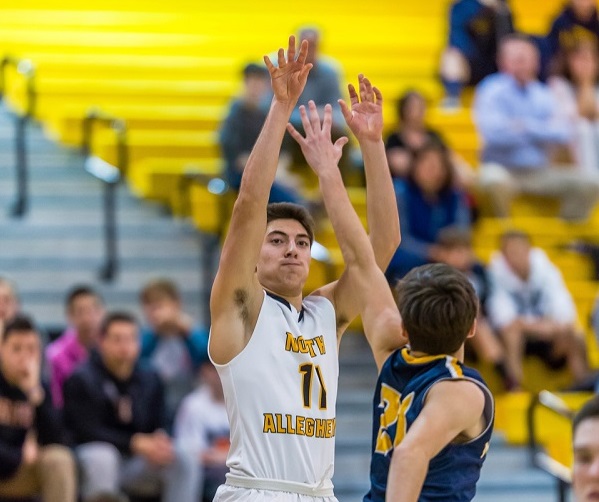 The North Allegheny Tigers built a 13-point lead on Wednesday night and held on in the second half to defeat Sewickley Academy, 64-60.  It was a great test against the top-ranked team in Class 2A.

The Tigers started slow, getting into early foul trouble when Isaac Barnes picked up three fouls in the game’s first three minutes.   Zach Johnson came off the bench and had a solid night, scoring ten points and nine rebounds.  The Tigers took a 10-point lead into the locker room, shooting 55-percent from the field in the first half. NA received solid play from Devin Bluemling and Curtis Aiken for a 37-27 lead.

The Panthers made their run in the third quarter when Justin Pryor got the hot hand to tie the game, but the Tigers responded with a solid second half from Barnes who played through foul trouble. Luke Carter iced the game with one minute to go with a 3-pointer.  Carter finished with five 3-pointers on the night and was named the Wright Automotive player of the game for his efforts.  Carter finished with a team-high 15 points.  For Sewickley Academy Pryor notched 16 points, Chris Groetsch had 14, and Nate Ridgeway netted 13 to lead the Panthers.

Named to the all-tournament team were Zach Johnson and Curtis Aiken. Isaac Barnes was selected as the Tournament MVP.

North Allegheny improves to 4-3 overall on the season. The Tigers will earn some time off and get back into section action Friday, January 6 when they travel to Butler.