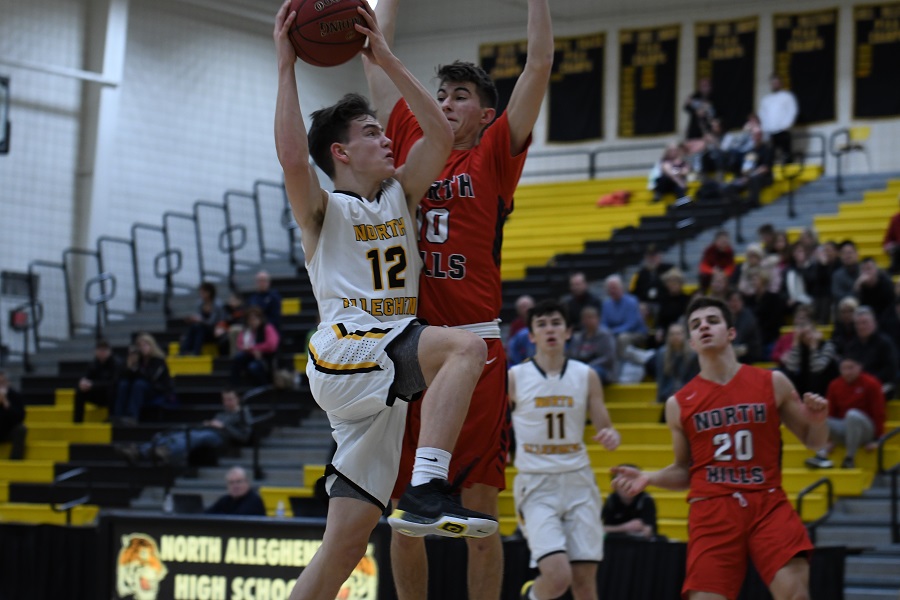 In the Section 1-6A finale, the North Allegheny Tigers defeated the North Hills Indians, 67-60, on Friday night. It was also senior night and senior Zach Johnson had a solid performance with nine points and 14 rebounds to help NA to the victory.

While it was senior night, the future of the North Allegheny program was on display as two sophomores and one junior played key roles in the victory. Sophomore Mike Iuzillino sparked the Tigers in the first half with four 3-pointers to open up a 32-25 lead at the half. Iuzillino finished with 17 points on the evening.

In the second half, North Hills began to chip away at NA’s advantage at the free-throw line and trimmed the score to 42-38 early in the third period.

However, North Allegheny used a 10-0 run to take command of the game with a 52-38 advantage. Sophomore Justin Altmeyer spearheaded the run and poured in five 3-pointers, finishing with 17 points and four steals on defense. For his efforts, Altmeyer was named the Wright Automotive Player of the Game.

Joining Iuzillino and Altmeyer in double figures was junior Walker Davidson who tallied 13 points and dished out four assists.

Despite a 28-point effort from North Hills’ Kam Taylor, the Indians were unable to rally back as the Tigers closed out the section schedule with a 67-60 victory.

North Allegheny improves to 8-13 overall and finishes with a 4-8 record in Section 1-6A. North Hills falls to 4-16 overall and 2-10 in the section. The Tigers will conclude the regular season tomorrow with a road game against the Gateway Gators at 1:30 p.m.