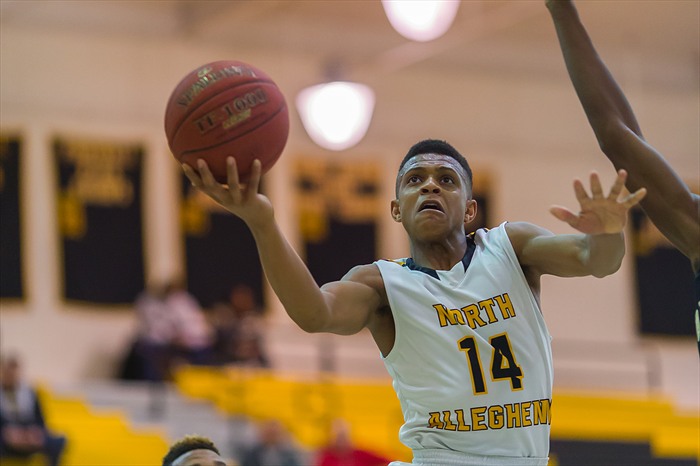 North Allegheny’s second-half rally fell just short on Wednesday night as the Canon-McMillan Big Macs held off the Tigers for a 70-67 win in the first round of the WPIAL playoffs. The game was a tale of two halves as NA trailed 43-26 at intermission before staging a furious rally in the second half.

Canon-McMillan could do no wrong in the first 16 minutes of the game knocked down nine 3-pointers while North Allegheny struggled from the field. The CM lead grew to as much as 20 points before the Tigers began their comeback.

Junior guard Curtis Aiken led the Tigers with 26 points and junior Ray Sandherr added 18 points. Canyon Tuman provided a spark off the bench, along with Anthony Hattrup. North Allegheny outscored Canon-McMillan, 25-14, in the final quarter but came up just three points shy of the Big Macs. The Tigers ran out of time as Aiken’s attempt at an 80-foot buzzer beater fell short. CM was paced by R.J. Bell who netted 21 points, and Britton Beachy who tallied 16 points.  Curtis Aiken was named the Wright Automotive Player of the Game for his efforts in leading the second half charge.

North Allegheny’s season comes to an end with a record of 14-9. Canon-McMillan advances to the WPIAL quarterfinals to face No. 1 Pine-Richland on Saturday. Congratulations to the NA boys’ basketball team and coaching staff for a fine season.