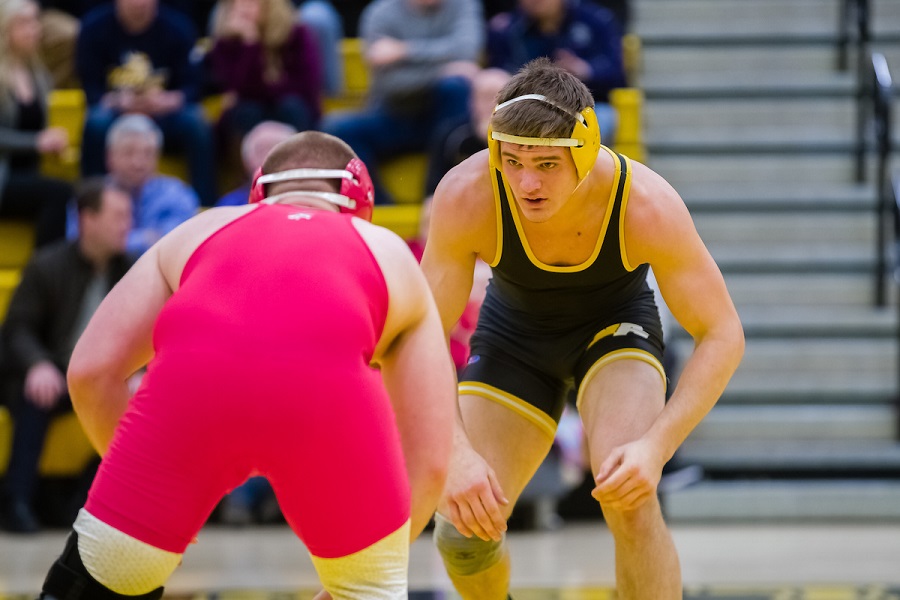 Four North Allegheny wrestlers have advanced to the semifinals and five more will compete in day two of the WPIAL Class AAA individual wrestling tournament at Canon-McMillan High School. Seniors Luke Landefeld, Jake Hinkson, Eric Hong and Jake Woodley all successfully navigated their way through the first day of the tournament to earn a place in the final four of their respective weight classes.

At 132 pounds, Landefeld opened the day with a win by fall over Bryce Long of Norwin in 1:57 and followed that up with a quarterfinal victory over Joel Cawoski of Greater Latrobe by an 8-1 decision. Hinkson picked up a fall over Franklin Regional’s Jimmy O’Neil at 145 pounds in 1:18 and delivered a 13-7 decision over Tyler Seliga of Belle Vernon in the quarterfinals.

At 160 pounds, Eric Hong pinned Angelo Harr of Greater Latrobe in 2:54 and defeated Franklin Regional’s Dan Contraguerro in the quarterfinals by a 4-2 decision. Jake Woodley barely broke a sweat in his first round win over Penn-Trafford’s Matt Wilkie at 195 pounds, pinning him in 34 seconds. Woodley followed that up with another win by fall, defeating Keyshawn Smith of Plum in 5:06.

Five other Tigers remain alive and will participate in day two of the tournament in the consolation bracket. Those NA grapplers include Jacob Downing (113), Zach Stedeford (138), Jon Hoover (145), Sean Hoover (170) and Derek Devine (285). A look at the North Allegheny results from day one at the WPIAL championships are below.

Action resumes at the Class AAA WPIAL individual wrestling tournament on Saturday morning at 10:30 a.m. You can listen to every match from the tournament courtesy of our friends at WJPA Radio by clicking here.