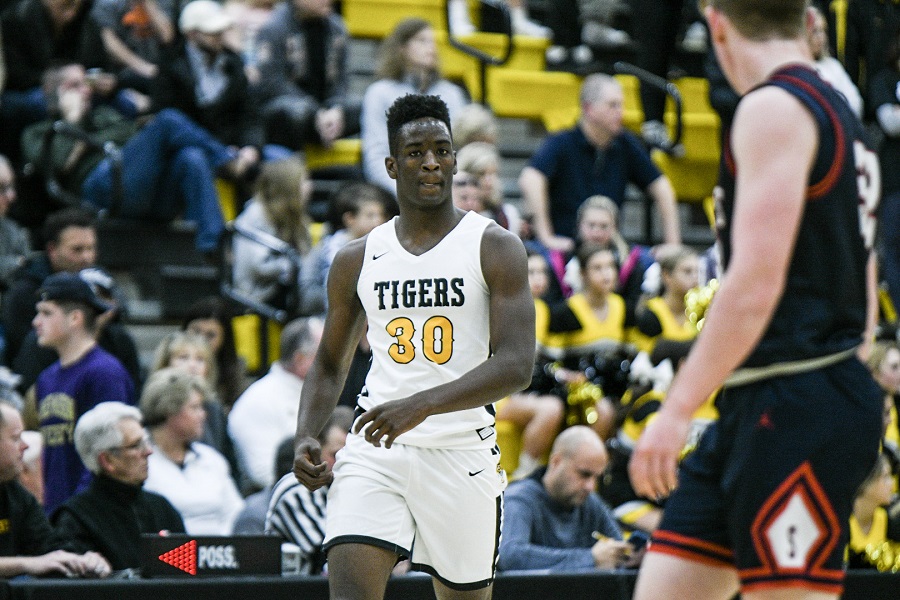 The North Allegheny boys’ basketball team battled the fourth-ranked Pine-Richland Rams on Friday night but fell by a 48-43 decision in Section 1-6A action. The Tigers held a 39-35 lead with 4:06 remaining but the visiting Rams outscored NA, 12-4, the rest of the way. Senior Logan Murray netted a game-high 25 points and poured in seven 3-pointers to lead Pine-Richland to the win.

Facing the fast-paced Rams, the Tigers were able to dictate the pace in the early going and led 10-5 after one quarter of play. Junior Khalil Dinkins scored six points in the first period and senior Grant Timmerson tallied 10 of his team-high 14 points in the first half to pace the NA attack.

After a slow start, Pine-Richland started to heat up from beyond the arc in the second quarter and took a 24-19 lead by intermission. Murray knocked down three of his seven 3-pointers in the first half.

The pendulum swung back toward North Allegheny in the third quarter as the Tigers tied the score at 30-30 heading into the fourth. With the help of Dinkins, the Tigers grabbed a 39-35 lead midway through the final stanza. Dinkins finished with 13 points and eight rebounds, earning Wright Automotive Player of the Game honors.

Also helping the NA charge was senior Zach Andreykovich with seven of his nine points coming in the second half. Despite the four-point lead with 4:06 remaining, Pine-Richland used an 8-0 run to take a lead it would never relinquish to close out a 48-43 win over North Allegheny.

Following the outcome, North Allegheny falls to 8-9 overall and 3-4 in Section 1-6A. Pine-Richland improves to 11-5 overall and 5-2 in the section. The Tigers will visit Central Catholic on Tuesday at 7:30 p.m. for another section contest.