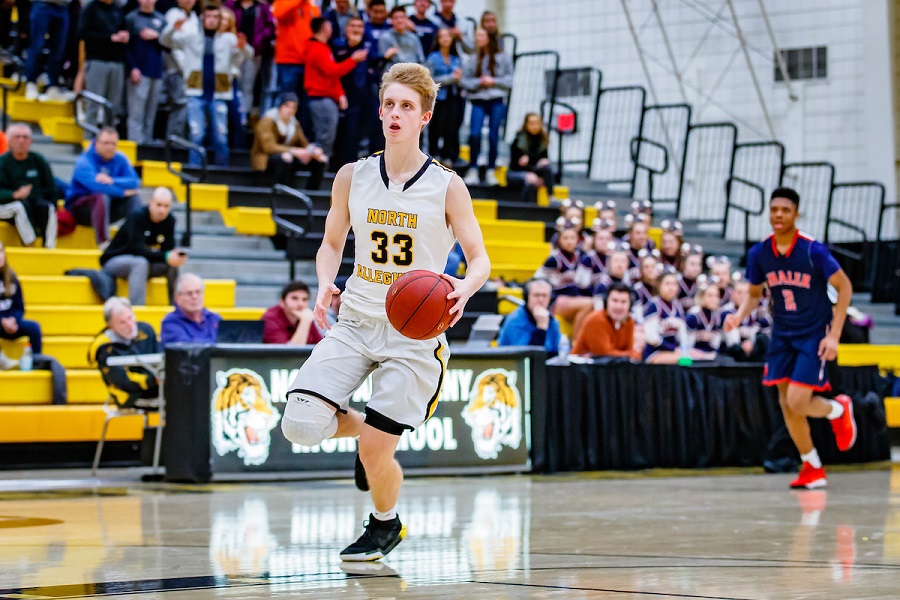 The Pine-Richland Rams won their sixth game in a row with a wire-to-wire 70-57 win at North Allegheny on Tuesday night.  The victory was also the fifth straight for the Rams in the head-to-head series with the Tigers.

Five players reached double figures for the Rams with junior point guard Greg Shulkosky and senior forward Phil Jurkovec pacing all scorers with 14-points and eight rebounds each. Shulkosky scored all of his points in the first half and connected on his first of three 3-pointers with the opening bucket of the game for a quick 3-0 lead.

The Rams led 14-10 late in the first quarter before pulling away from the Tigers with a 15-0 run that was spearheaded by Shulkosky. Pine-Richland carried that first half momentum to intermission with a 40-20 lead.

The Tigers tried to scratch their way back in the second half but couldn’t gain much ground until the waning minutes of the game. Senior guard Curtis Aiken did his best to rally the Tigers with 27 points and four 3-pointers. For his efforts, Aiken was named the Wright Automotive Player of the Game.

Joining Aiken in double figures for the Tigers was senior Zach Johnson who tallied 11 points and nine rebounds.

Following the loss, North Allegheny slips to 5-9 overall and 3-5 in Section 1-6A. Pine-Richland improves to 13-3 overall and 6-1 in section play. The Tigers hope to bounce back with a home date against the Altoona Mountain Lions on Friday night in a non-section contest.