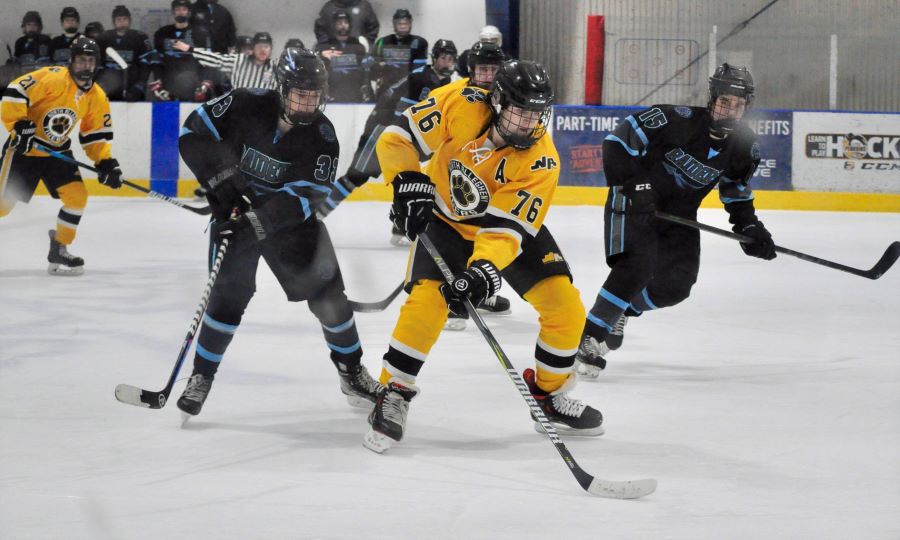 In a rematch of the last year’s Class AAA Penguins Cup semifinal, the North Allegheny ice hockey team dropped a 4-1 decision to the Seneca Valley Raiders on Monday night in a battle of first place teams at the Baierl Ice Complex. The Raiders jumped out to a 3-0 lead and held off an NA rally in the third period to gain sole possession of the top spot in Class AAA with 21 points in the standings.

The Raiders scored just 1:26 into the contest on an unassisted goal by junior Jacob Komaniak for an immediate 1-0 lead. Seneca Valley added onto its lead later in the first period when Tyler Garvin fed a pass to senior Jaxson Read at the right-wing circle for a goal and a 2-0 lead at the 14:43 mark of the first.

North Allegheny had a chance to edge back into the contest when Read took a penalty late in the second period, giving the Tigers their first power play of the night. However, it was Seneca Valley who scored on a short-handed tally by Andrew Malichky for a 3-0 lead at the 15:35 mark of the second period.

In the third period, a pair of Seneca Valley infractions gave North Allegheny a 5-on-3 power play. The Tigers cashed in at the 10:34 mark of the period on a goal by Trey Gallo, his seventh of the season, to trim the deficit to 3-1. For his efforts, Gallo was named the Wright Automotive Player of the Game.

In the waning minutes, North Allegheny pulled goalie Rylan Murphy for an extra attacker but Seneca Valley put the game away on an empty net goal by Read, his 14th of the year, for a 4-1 lead with just 21 seconds remaining.

Murphy made 15 saves in net for the Tigers. Seneca Valley net minder Jonathan Nichols stopped 25 pucks to earn the victory.

North Allegheny slips to 9-3-1 on the season, while Seneca Valley improves to 10-1-1. The Tigers have the holiday break off and return to action on Jan. 2 against Pine-Richland.