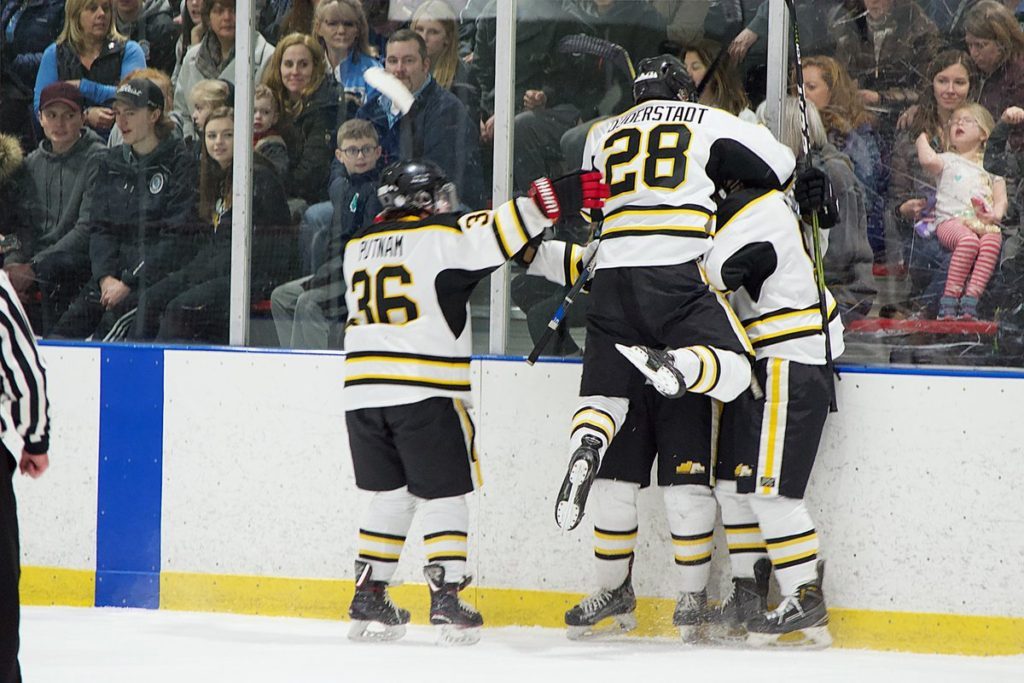 North Allegheny earned a fifth straight trip to the PIHL Class AAA semifinals with a 3-2 victory over Seneca Valley on Monday night in the quarterfinal round. After sweeping the Raiders for three wins in the regular season, the Tigers ousted the defending Penguins Cup champions with yet another victory. Senior Aaron Miller sparked the NA offense with two goals and an assist on his way to Wright Automotive Player of the Game honors.

The Tigers leading scorer in the regular season, Miller pounced on his first opportunity at the 7:52 mark of the first period when Justin Symons sent a shot on net and SV goalie Aiden Campbell left an appetizing rebound and a wide-open net. Miller feasted on the rebound for a 1-0 lead.

North Allegheny’s second goal came in similar fashion when senior Haden Shimko sent a backhand toward Campbell and again Miller tickled the back of the net with the rebound for a 2-0 lead at the 10:12 mark of the first.

The Tigers tacked on one more goal before the end of the period thanks to a power-play marker by Tyler Lamark, assisted by Miller and Tyler Duderstadt for a 3-0 lead.

The physicality of the contest picked up in the second period as the two teams combined for 46 penalty minutes. Despite the uptick intensity, neither team scored as NA’s 3-0 lead remained intact.

Not until the 8:35 mark of the third period did Seneca Valley finally solve the NA defense and goalie Richard Karapandi. On their third power play of the night, the Raiders’ Bryce Korner blasted a slap shot from the left point that was deflected in front by Will Hohman to trim the SV deficit to 3-1.

Receiving another power-play opportunity with less than two minutes remaining in the game, the Raiders cashed in courtesy of a Tyler Draper slap shot that cut the score to 3-2, Tigers, with just 26 seconds remaining. The Seneca Valley rally proved to be too little, too late as North Allegheny hung on in the waning seconds for the quarterfinal round triumph.

In net, Karapandi made 27 saves to earn his 13th victory of the year and first of the postseason. Campbell made 25 stops for the Raiders in a losing effort.

With the win, North Allegheny advances to the PIHL Class AAA semifinals to face Bethel Park on Thursday, March 14 at the RMU Island Center at 9:00 p.m. The game will be broadcast live via the internet on the North Allegheny Sports Network.