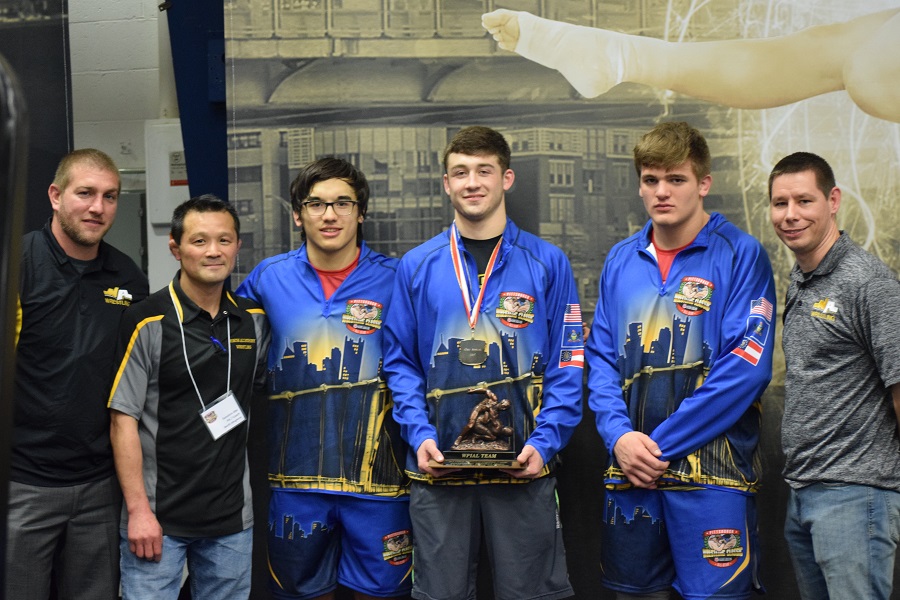 The top wrestlers in the country came to Western Pennsylvania for the Pittsburgh Wrestling Classic and several North Allegheny grapplers played a prominent role in Saturday’s event at Pitt’s Fitzgerald Field House. The Tigers sent three wrestlers to the classic, the second most in school history. In 1990, NA had four wrestlers on the Pennsylvania team and one on the WPIAL team. North Allegheny’s three wrestlers who took part in this year’s classic were seniors Jake Hinkson (138-42), Eric Hong (164-13) and Jake Woodley (148-41).

The WPIAL All-Stars defeated the Georgia All-Stars, 29-18, and Hinkson and Hong helped the WPIAL claim the victory. Hinkson, a three-time PIAA place-winner and Kent State recruit, bumped up to 152 pounds to face Georgia State Champion and University of Chicago commit, Will Britain, from Cambridge HS (201-19). Hinkson was trailing, 5-0, going into the final period before he secured four takedowns in the final period to tie the score, 8-8, with 15 seconds remaining. He then picked up his fifth takedown of the match in overtime to win, 10-8. Hinkson’s performance earned him the WPIAL Outstanding Wrestler Award. Hinkson joins Andy Candiello, Classic XXXVI – 2010, as the only wrestlers from North Allegheny to win this award.

The United States All-Stars held off the Pennsylvania All-Stars, 28-20. Woodley, a two-time PIAA state champion and Oklahoma University commit, was a member of a feisty PA squad that gave the U.S. All-Stars all they could handle.  Woodley, ranked No. 3 in the country, took on No. 1-ranked Jacob Warner of Washington Community HS in Illinois. Warner (174-10) is a three-time Illinois State Champion, a Cadet World Bronze Medalist, and a University of Iowa commit. Warner was able to open up a 5-0 lead on Woodley. However, Woodley charged back with an escape and a takedown in the final period to bring the score to 5-3, but wasn’t able to close the gap any farther.