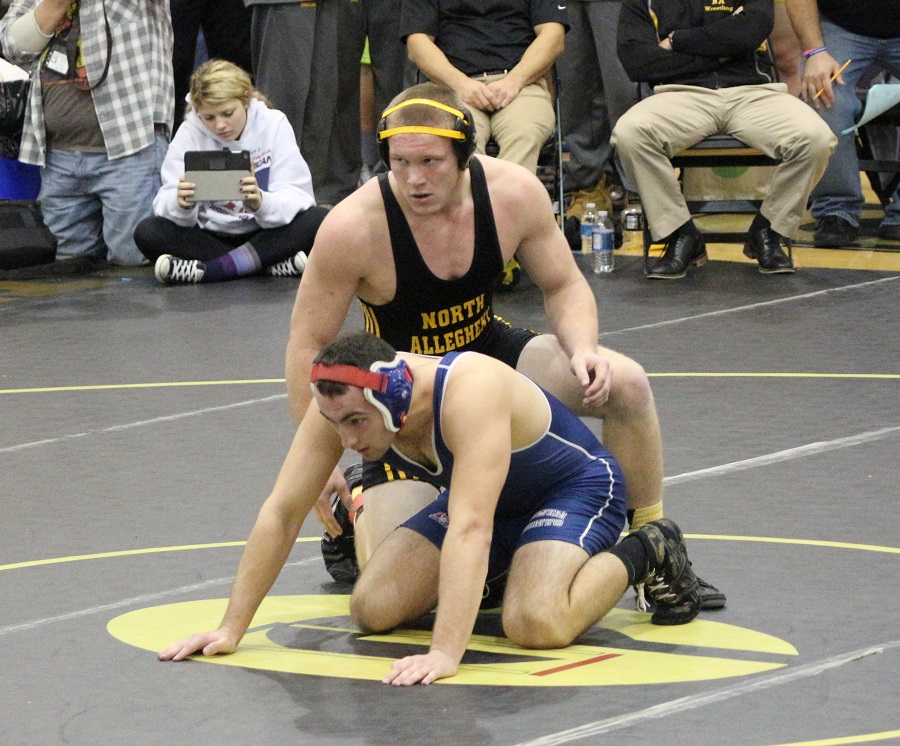 Tigers Advance To Semifinals On Thrilling Fall By Zach Smith

One year ago in the WPIAL 3rd place consolations, the Tigers fended off Canon-McMillan in the final bout of the night for a 29-28 victory to earn a trip to the state team tournament.  Last night in the WPIAL quarterfinals it was the same two teams in a similar situation, but this time Canon-McMillan was trying to stave off a North Allegheny rally.  Trailing 24-21, senior Zach Smith pinned CM’s Jared Hladycz in the final bout at 220 pounds with 47 seconds remaining in the third period to lift the Tigers to a 27-24 triumph and send North Allegheny to the WPIAL semifinals.

The match started at 285 pounds where senior Layne Skundrich bumped up to face Canon-McMillan’s Brendan Furman, the fourth-ranked wrestler in that weight class.  Skundrich earned a hard-fought 3-1 decision over Furman for an important victory in the opening bout.

The Big Macs’ strength was their lighter weight classes and CM rolled off four straight victories from 106 through 126 pounds, including a win by fall by Logan Macri at 106 pounds to take a 15-3 lead.  North Allegheny cut the score to 15-10 when Jake Hinkson earned a 5-3 decision over Matt Obrock at 132 pounds and A.J. Boeh delivered a 15-3 major decision at 138 pounds.

Canon-McMillan responded with decisions by Micah Kusturis and Blaze Kansco at 145 pounds and 152 pounds, respectively, for a 21-10 lead. With five bouts remaining, there was little margin for error for the Tigers and NA needed to make up ground quickly.

Jake Woodley defeated Bryan Milligan at 160 pounds by an 11-3 major decision and Jacob Fritch thrilled the home crowd with a 3-1 overtime decision over Jesse Lesko at 170 pounds.  With the Tigers trailing 21-17, the Big Macs received a lift when Tommy James edged Clay Byerly at 182 pounds with a 5-3 decision to make the score 24-17, Canon-Mac.

Down to the final two bouts, senior Jeff Clemens answered the call with a 16-6 major decision over James Zeremenko and the score was 24-21, Big Macs.  That set the stage for the final bout heroics of Smith and his third period pin fall over Hladycz.  For his efforts, Smith was named the Wright Automotive Wrestler of the Match.

Earlier in the night, North Allegheny dominated Peters Township for a 66-6 victory in the opening round of the WPIAL Team Tournament. The Tigers received nine wins by fall in the landslide victory.  One of the most impressive wins in the matchup with the Indians was delivered by Clay Byerly at 182 pounds who defeated fifth-ranked Michael McAleavey.  The fourth-ranked Byerly claimed an 8-2 decision and was named the Wright Automotive Wrestler of the Match in the Tigers win over Peters Township.

North Allegheny improves to 13-2 on the season and advances to the WPIAL semifinals to face the reigning Class AAA champion Franklin Regional Panthers on Saturday at 1:30 pm. For a look at the entire Class wrestling bracket, click here.