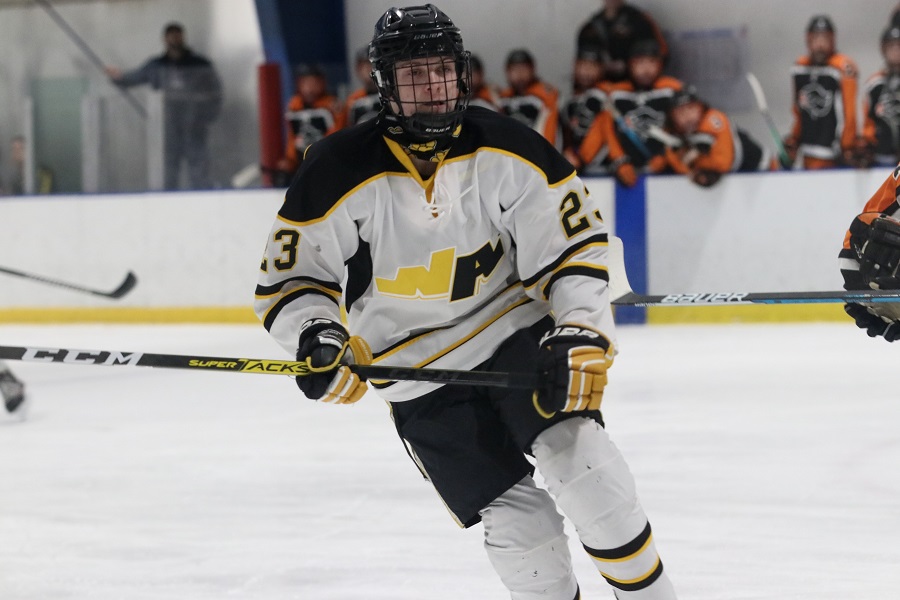 Tigers bounce back with 6-0 win over Bethel Park

After falling 6-3 to Peters Township last Monday. The Tigers got refocused and had a dominant effort in a 6-0 victory over Bethel Park, Monday night at the Baierl Ice Complex.

Things got started right off the bat as it was all North Allegheny. The Tigers got four shots on net on the opening shift of the game and things only got worse for Bethel Park from there. Three and a half minutes into the game Ryder Wilson got a steal on the forecheck and passed the puck to Lorenzo Colaizzi, who banked it off the goalie’s left pad and in and North Allegheny got on the board early. Halfway through the first, right after killing a penalty, Connor Chi and Cole Jackman had a 2-on-1. Chi beat his defender and passed the puck over to Jackman, who finished and the Tigers led 2-0 which was the score after a period of play.

The second period was all about Chi as he picked up both of NA’s goals three and a half minutes apart and the Tigers led 4-0 after two periods. Early in the third period it was Wilson’s turn to get on the scoresheet as he buried his first goal of the year, essentially putting the game away at 5-0 and with 6:00 remaining in the game, Luke Washabaugh put one more in for good measure and the Tigers avenged their loss from last week with a 6-0 victory.

Wilson was the Wright Automotive Player of the Game picking up a goal and an assist. Wilson only had one point coming into the game. Rylan Murphy picked up his third shutout of the season making 20 saves.

North Allegheny improves to 14-2-1 with 29 points. North Allegheny still sits in first place and is three points away from locking up the top spot. Bethel Park falls to 7-8-1 with 15 points. The Black Hawks fall to eighth place with the loss.

The Tigers will be back in action on February 17, when they head south to take on Upper Saint Clair with a 9:10 p.m. puck drop.