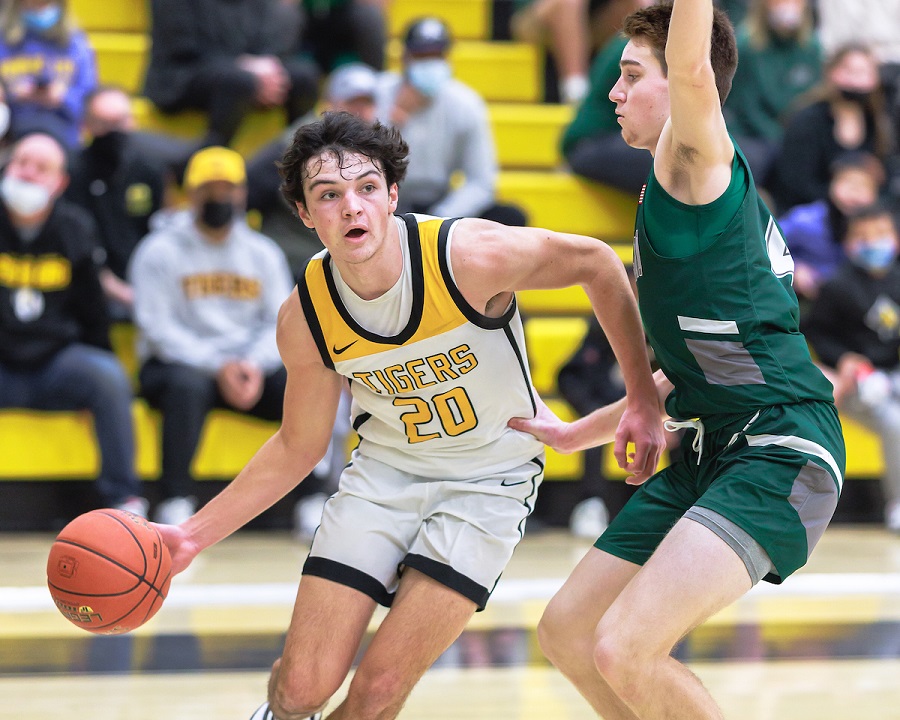 The North Allegheny boys’ basketball team earned a hard-fought 56-48 victory over Mt. Lebanon in non-section play on Tuesday night. The win was North Allegheny’s fifth in a row to start the 2021-2022 season and snapped a three-game losing streak in the head-to-head series with the Blue Devils.

In a back-and-forth first half, which featured eight lead changes, it was the Blue Devils who held a 21-17 lead after one quarter of play thanks in large part to the shooting of Christian Powers. The senior guard scored 13 points in the opening stanza and totaled 19 in the first half with four 3-pointers.

While Mt. Lebanon relied on a single player for its main source of offense, NA saw contributions from six different Tigers to gain a 30-29 lead by halftime. Of the six NA scorers, senior Robby Jones was the pace-setter with 10 points in the half and totaled a team-high 17 points on the night. For his efforts, Jones was named the Wright Automotive Player of the Game.

On Mt. Lebanon’s opening possession of the second half, Powers poured in a trey from the right corner to put Mt. Lebanon in front, 32-30. The 3-pointer gave Powers 22 points on the night but it was the last time he would be heard from as the NA defense clamped down on Powers for the remainder of the game.

With the game tied 37-37 midway through the third quarter, sophomore Joey Dopirak netted back-to-back buckets to spark a tide-turning 12-2 run for a 49-39 lead by the early stages of the fourth quarter. Dopirak finished the night in double figures with 11 points.

Another key component to the run was the North Allegheny defense, which turned up the heat on Mt. Lebanon. The Blue Devils played most of the quarter without senior point guard Zach D’Alesandro, who sat with four fouls and the Tigers defense capitalized.

In the fourth quarter, D’Alesandro returned to the floor to facilitate a 6-0 run that trimmed the NA advantage to 49-45 with 4:20 remaining in the game. Despite the run, Mt. Lebanon would come no closer as the Tigers staved off the Blue Devils for a 56-48 win.

North Allegheny improves to 5-0 overall with the non-section win. Mt. Lebanon falls to 2-3 on the young season. The Tigers will host Erie City on Thursday night at 6:30 p.m. The game will be broadcast live by the North Allegheny Sports Network.