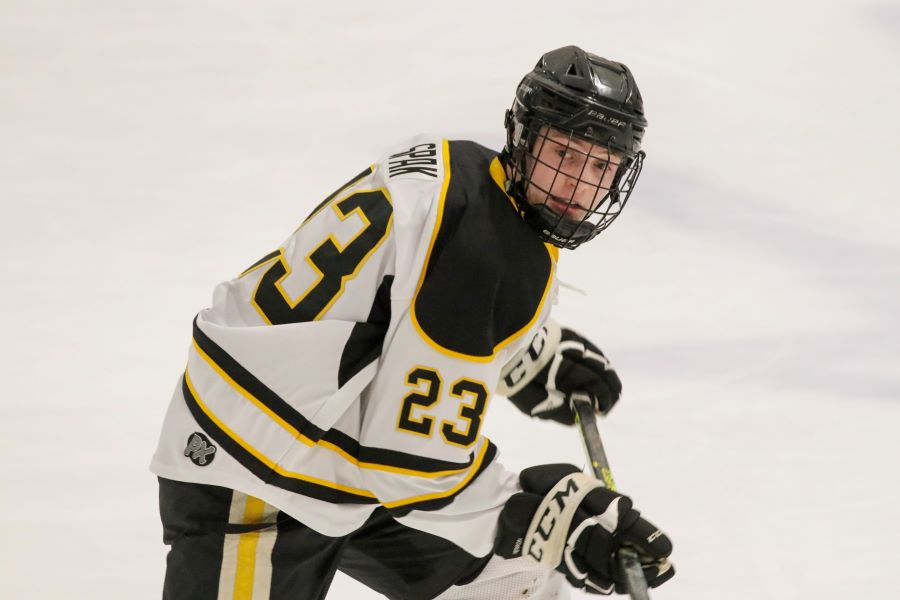 Tigers Edged In Overtime By Rams, 5-4

The North Allegheny ice hockey team played in a back-and-forth battle with Pine-Richland on Monday night and dropped a 5-4 decision in overtime to the rival Rams at the Baierl Ice Complex. Zachery Howard scored the game-tying goal in the third period and the game-winner in the overtime to propel Pine-Richland to the win. It’s the fourth overtime game for NA this season, going 2-2 in such contests.

The Tigers struck for the only goal in the first period on a tally by Matt Irvin, his seventh of the season, for a 1-0 lead just 4:15 into the game.

The see-saw nature of the contest developed in the second period. Pine-Richland tied the game 47 seconds into the period courtesy of a power play goal by Ryan Peacock and then took a 2-1 lead at the 11:32 mark on a goal by Jeremy Casper. North Allegheny promptly responded less than a minute later and knotted the score at 2-2 thanks to a Cole Bianchin marker. The Tigers regained the lead at 3-2 with only three seconds left in the second period when senior Trey Gallo tickled the twine for his eighth goal of the year.

Shawn Peacock brought the Rams back at the 4:40 mark of the third period and tied the contest at 3-3. At the 12:44 mark, senior Nate Spak scored his first goal of the campaign to put North Allegheny back on top, 4-3. However, a North Allegheny roughing penalty opened the door for a Pine-Richland comeback. Howard knotted the score at 4-4 with 3:05 remaining in the game with a power play goal to force overtime. The Rams were 2-for-4 with the man-advantage on the night while the Tigers were 0-for-3.

In overtime, Howard struck again for the game-winning tally and Pine-Richland prevailed, 5-4. North Allegheny outshot Pine-Richland, 42-26, but Rams goalie Daniel Mooney earned the win with 38 saves. Andrew Long got the start in between the pipes for NA and made 21 saves.

North Allegheny sits at 9-3-2 on the season with the overtime defeat and picks up a point in the Class AAA standings to remain in second place. Pine-Richland improves to 6-7-1 on the year. The Tigers look to bounce back on Monday, Jan. 9 with a home date against Peters Township at 9:00 p.m. The game will be broadcast live by the North Allegheny Sports Network.