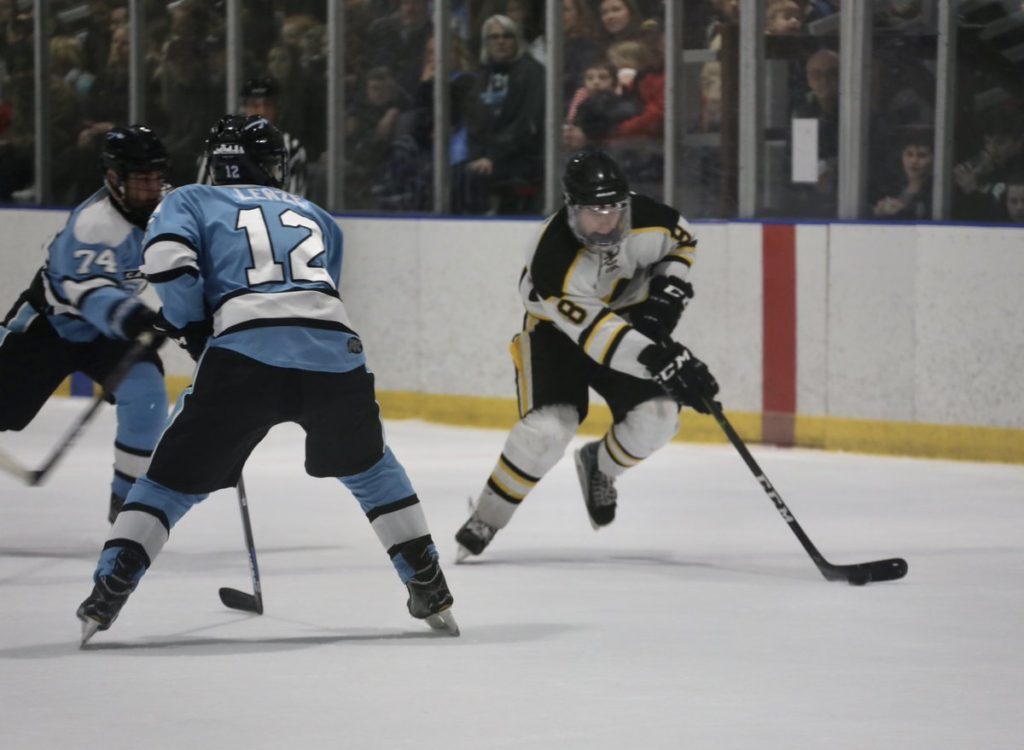 In a battle between the top two teams in the Class AAA standings, the North Allegheny ice hockey team cruised to a 7-1 win over the Seneca Valley Raiders on Monday night at the Baierl Ice Complex. Facing a team that had allowed only 12 goals all season, the Tigers netted seven goals in the final two periods against the shell-shocked Raiders. Senior Tyler Lamark tallied four points and a hat trick on his way to Wright Automotive Player of the Game honors.

Undaunted, North Allegheny continued to possess the puck and cashed in on Lamark’s first goal of the night at the 4:14 mark of the second period and the game was tied 1-1. Lamark’s goal opened the floodgates for North Allegheny, who scored three more times in the period.

At the 10:07 mark of the second, senior Tyler Putnam created a steal and turned it into a breakaway goal, beating SV goalie Robbie Halyama through the five-hole for a 2-1 North Allegheny lead. At the 13:20 mark, Colin O’Neill sent a slapshot on net and freshman Trey Gallo cleaned up the rebound to extend the lead to 3-1. Gallo added a power play goal with just 1:07 remaining in the period and the Tigers led 4-1 going into the third.

In the final stanza, the Tigers continued to pour it on with two more goals by Lamark and a final marker by senior Will Parraguirre to finish off a 7-1 victory. Lamark’s first goal of the period came on the power play.

Gallo and Putnam both finished with three points on the night. Also adding assists in the blowout were O’Neill, Tyler Sippel, Vince Abel, Luke Washabaugh and Connor Chi.

In net, senior Tyler Boyles made 33 saves to improve to 6-0-0 on the season. Adding to the defensive effort, junior Christopher Hanlon delivered two bone-tingling hits in open ice.