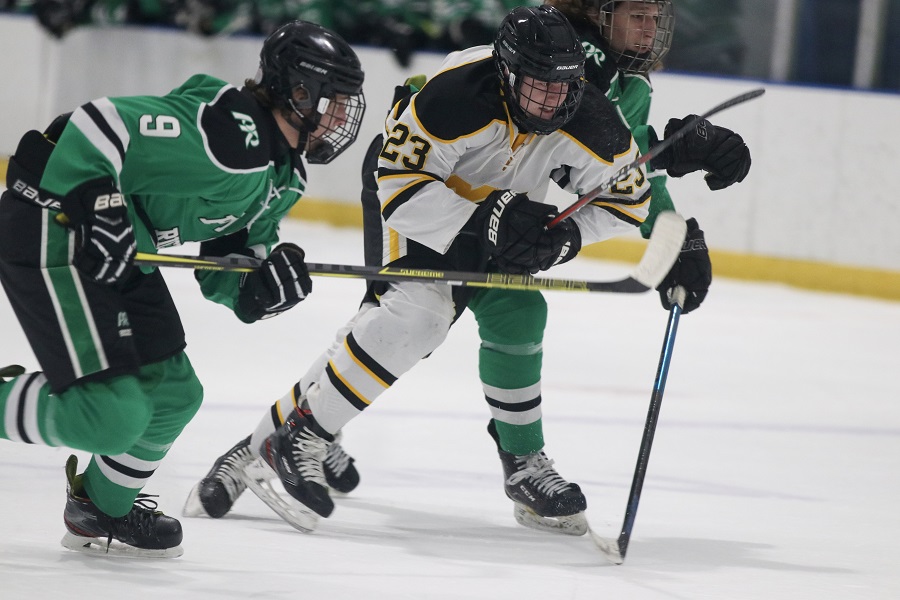 After NA boys basketball team was able to erase a 16-point deficit and defeat neighborhood rival Pine-Richland on Friday night. It was time for the Tigers and Rams to meet on the ice. It was another humbling experience for the Rams as North Allegheny jumped out to a 5-1 lead and coasted to a 6-3 victory. Pine-Richland came into the game with the top offense and defense statistically.

Pine-Richland jumped out of the gates very hot, taking a shot that hit the post seven seconds into the game. Things settled down from there until Matt Gentile put a shot through traffic and past Pine-Richland goalie James Saber with 3:28 remaining in the first period for a 1-0 NA lead. The Tigers tallied another late goal when Nathan Spak found Connor Chi to increase the lead to 2-0 at the end of the first period.

North Allegheny’s momentum continued in the second period when Spak found the back of the net and the Tigers were rolling with a 3-0 lead early in the second. Pine-Richland earned a goal two minutes later when Charles Mill was able to score from the right wing circle, cutting NA’s lead to 3-1. Pine-Richland looked to have momentum when a charging call put North Allegheny on the power play. Chi converted on the power play, putting the momentum squarely on the Tigers side and gave them a 4-1 lead. The back breaker came late in the second period when Trey Gallo took a slap shot from the point and the puck deflected off of a Rams’ defenseman and into the net. North Allegheny led 5-1 at the end of the second period.

Pine-Richland fought to stay in the game, getting goals from Samuel Perry and Charlie Miller to trim the score to 5-3, Tigers. However, another Pine-Richland penalty put the Tigers power play on the attack. It was once again Chi who finished, putting a puck through traffic and into the PR net to give the Tigers a 6-3 lead. The goal gave Chi a hat-trick for the second straight game. For his efforts, Chi was named the Wright Automotive Player of the game with three goals, and multiple hits and blocked shots. Josh Bailey got the win in net for the Tigers.

North Allegheny improves to 7-1-0 overall giving them 14 points. They sit alone atop Class AAA. Pine-Richland falls to 4-2-0 with eight points. They are tied for fourth with Peters Township. Up next for the Tigers is a trip to Alpha Ice Complex to take on the Central Catholic Vikings next Tuesday at 7 p.m.