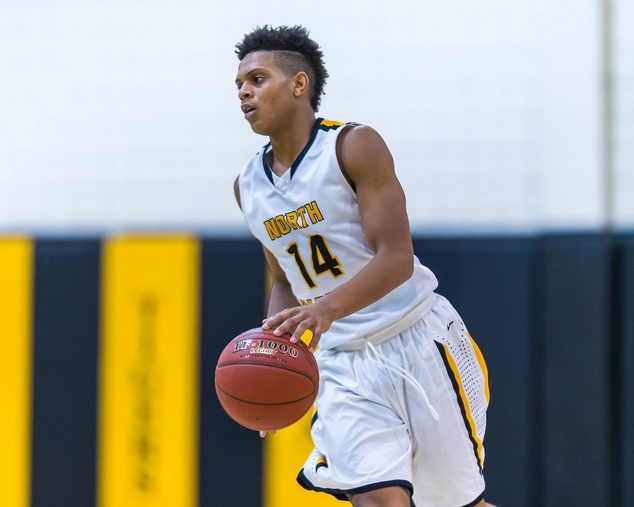 In a seesaw affair at North Allegheny, a half-court shot by Seneca Valley’s Payton Skalos struck the back iron at the buzzer as the Tigers held on for a 54-52 victory on Tuesday night. The win is the 19th in a row for NA against Seneca Valley, but more importantly locks up a berth in the Class 6A playoffs.

In a “win and you’re in” scenario for both teams, North Allegheny and Seneca Valley battled through nine ties and nine lead changes. Tied 20-20 in the second quarter, the Tigers opened up a 28-20 lead thanks in part to 3-point connections from Luke Carter and Curtis Aiken. Carter totaled nine points and Aiken netted a game-high 18 points for the Tigers.

Seneca Valley responded with a 9-0 run to end the first half, punctuated on a left-handed hook shot by Mark Smathers before the final horn to give the Raiders a 29-28 lead at intermission. The ebb and flow of the contest continued in the second half and the game was tied 45-45 with 3:45 remaining in the fourth quarter. North Allegheny took a 48-45 lead on a 3-pointer by senior Devin Bluemling with 2:29 left to play and the Tigers never trailed again.

NA held a 52-47 advantage with 29 seconds remaining in the game before Seneca Valley’s Justin Koken drained a 3-pointer from the right corner with 16 seconds to play to cut the score to 52-50. After a 1 for 2 trip to the free-throw line for Aiken, Seneca Valley connected on a floater in the paint by Chris Hart to slice the NA lead to 53-52 with seven seconds on the clock. Following a quick foul, senior Isaac Barnes was sent to the charity stripe, and like Aiken, went 1 for 2 to bring the Tigers advantage to 54-52. With three seconds left, Seneca Valley sprinted up court and Skalos uncorked a half-court try that bounced off the back rim and North Allegheny hung on for the two-point win.

Joining Aiken in double figures was junior Zach Johnson who posted a double-double off the bench with 11 points and 11 rebounds. For his efforts, Johnson was named the Wright Automotive Player of the Game. Carter and Barnes added nine points each for the Tigers. For Seneca Valley, Hart paced the Raiders with 13 points and Skalos chipped in with 10.

North Allegheny improves to 12-7 overall and 6-5 in Section 1-AAAAAA. Seneca Valley slips to 12-9 overall and 5-6 in the section. With a playoff spot secured, the Tigers set their sights on second place in the section with a visit to North Hills on Friday night. The game will be broadcast live via the internet on the North Allegheny Sports Network. Tip-off is set for 7:30 p.m.