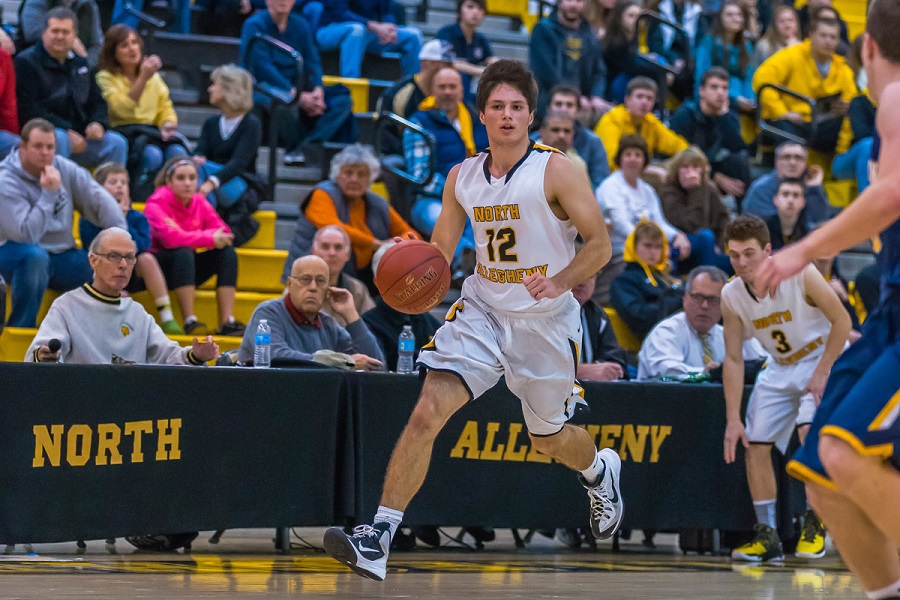 North Allegheny rallied from a 15-point deficit for a hair-raising 82-74 victory over the Monessen Greyhounds on Tuesday night at the Wright Automotive Holiday Tournament. North Allegheny trailed 49-34 with 6:55 to play in the third quarter before staging a stirring second-half comeback. The Tigers were led by junior forward Griffin Sestili who posted a double-double, scoring 23 points and hauling in 11 rebounds. For his efforts, Sestili was named the Wright Automotive Player of the Game.

While Sestili’s heroic effort helped the Tigers to the win, a technical foul by the NA forward gave the Greyhounds momentum to begin the third quarter. Already leading 41-32 coming out of halftime, Monessen capitalized on the technical foul when junior Jaden Altomore drained two free throws and Dwight Moore connected on a 3-pointer to increase the Greyhounds lead to 46-32. Moore, who finished with a game-high 31 points, hit another 3-pointer later in the quarter to push the Monessen advantage to 49-34 for the largest lead of the night.

North Allegheny inched back behind the play of Sestili and sophomore Curtis Aiken who netted 21 points. The Tigers also turned up the intensity on defense in the second half and forced the Greyhounds into 17 second-half turnovers after they committed only nine miscues in the first half. Senior Keegan Phillips was the top ball hawk with four steals, while Sestili and Ray Sandherr collected three steals apiece.  Sandherr also finished in double figures with 15 points and knocked down three shots from beyond the arc.

Trailing for the majority of the second half, North Allegheny eventually tied the game at 69-69 with 2:35 to play on a pair of free throws by Sestili and grabbed a 72-69 lead when Aiken poured in a 3-pointer with 1:49 remaining in regulation. Undaunted, Monessen answered back with a 3-pointer by Moore with 36 seconds to play to tie the score at 72-72 and ultimately force overtime.

In the extra session, Sestili put the Tigers ahead 75-72 with a lay-up and free throw following a Monessen foul. The Greyhounds’ talented freshman Lyndon Henderson was injured during the play and left the game with an apparent shoulder injury. The bucket by Sestili, and injury to Henderson, seemed to take the wind out of Monessen’s sails and North Allegheny had the lead and the momentum throughout overtime.

The Tigers pulled away in overtime for an 82-74 win and will face McKeesport in the championship of the Wright Automotive Holiday Tournament at 7:30 tonight. The game will be broadcast live via the internet on the North Allegheny Sports Network.

North Allegheny improves to 6-2 overall with the win. Monessen slips to 6-3 overall.