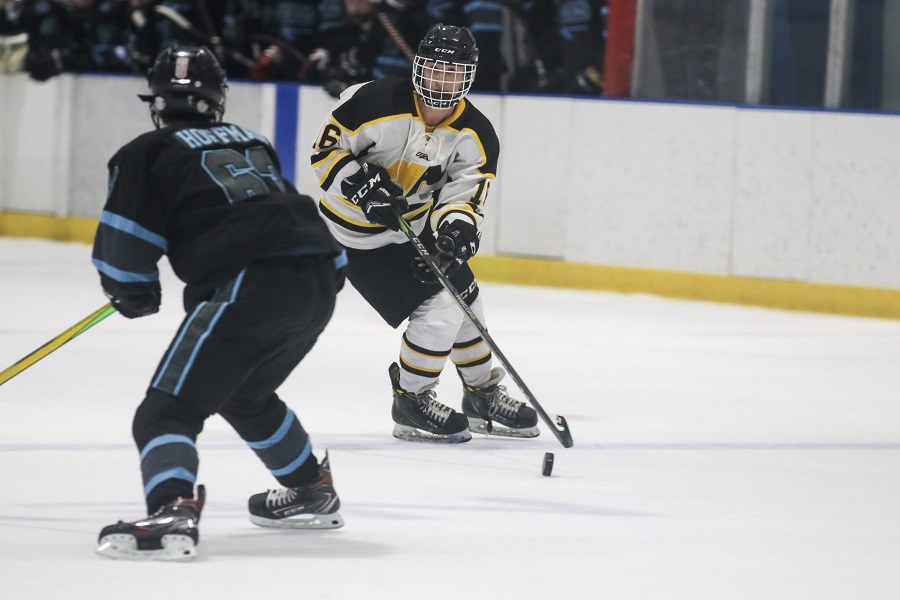 Tigers Stave Off Raiders For 4-3 Win

The North Allegheny ice hockey team snapped a three-game losing streak on Tuesday night with a 4-3 victory over the Seneca Valley Raiders at the Baierl Ice Complex.

With the help of a strong forecheck, the Tigers struck for three goals in a one-sided first period. Junior Connor Chi opened the scoring just 1:27 into the game for a 1-0 lead. Following a roughing penalty on Seneca Valley’s Shane Kozlina late in the period, NA senior Luke Washabaugh, who assisted on the Chi goal, cashed in for a power play goal and a 2-0 lead at the 13:31 mark. Matt Irvin and Austin Peterson assisted on the Washabaugh marker.

Then with 28 seconds to go in the first period, Chi scored again for a 3-0 advantage. Chi’s second goal was set up beautifully with spectacular passing from Trey Gallo and Kevin Hart.

The Tigers outshot the Raiders, 20-3, through the midway point in the second period and tacked on another goal when Nathan Spak scored for a 4-0 lead. Chi assisted on the Spak goal, finishing with three points. For his efforts, Chi was tabbed the Wright Automotive Player of the Game.

While it appeared North Allegheny was firmly in control, Seneca Valley used two late goals in the final minute of the second period to swing the pendulum. Noah Nicklas scored the first Raiders goal with 37 seconds left in the period and Ryan Russell scored just 27 seconds later to trim the NA lead to 4-2.

Following intermission, Seneca Valley cut the score to 4-3, North Allegheny, when Russell netted his second goal of the night at the 6:35 mark of the third period. The Raiders continued to threaten the Tigers lead down to the final minute, but senior goalie Josh Bailey made his 21st save of the night as time expired to secure a 4-3 victory.

With the win, North Allegheny leaps back into second place in the Class AAA standings with a record of 9-3-1. Seneca Valley remains in fifth place with a mark of 8-3-0. The Tigers will return to the ice on Tuesday, March 2 against Cathedral Prep at 5:40 p.m.