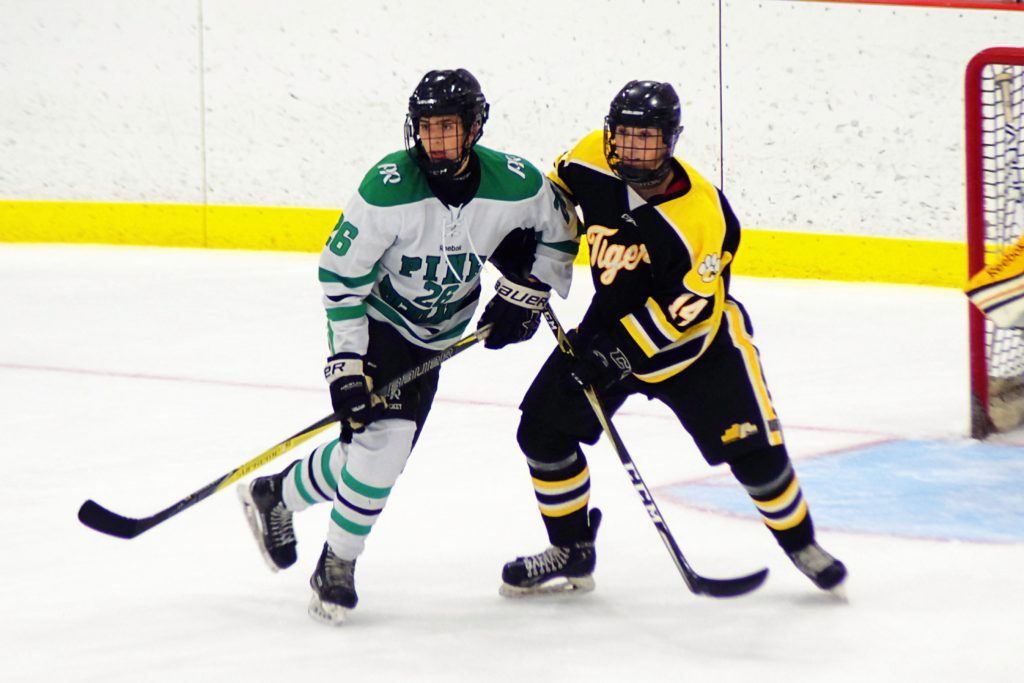 A five-goal outburst in the third period propelled the North Allegheny Tigers to a road win over the Mt. Lebanon Blue Devils on Monday night, 6-3. The first-place Tigers fell behind, 3-0, in the second period before scoring six unanswered goals to prevail.

After netting a hat trick against Seneca Valley last week, senior Aaron Miller provided an encore with two goals against Mt. Lebanon to give him seven on the season.

The Blue Devils owned the early momentum and scored the first three goals of the game to take a 3-0 lead by the 2:35 mark of the second period. Wyatt George, the leading scorer in Class AAA, tallied two of Mt. Lebanon’s goals to give him 12 on the year.

After George’s second goal of the night, the Tigers controlled the action through the remainder of the second period and finally got on the board with a goal by Aaron Mark with 3:50 left in the period. The Mark goal cut the score to 3-1, Blue Devils.

Following intermission, North Allegheny unleashed an avalanche of goals that swayed the complexion of the contest. Miller cut the Mt. Lebanon lead to 3-2 with 11:21 left in regulation and Matt Gentile scored less than 30 seconds later to knot the score at 3-3.

Miller’s second goal of the evening was a power play tally with 6:08 remaining that gave NA a 4-3 advantage. The Tigers put the game away with markers by Tyler Putnam and Justin Symons in the waning minutes to close out a 6-3 victory.

Winners in six of their last seven games, the Tigers improve to 10-2 on the season and sit in first place in Class AAA with 20 points. Third-place Mt. Lebanon slides to 6-4 on the season with 12 points in the standings.

North Allegheny will get a few weeks of rest over the Holiday Break before returning to action against Peters Township on January 7. The contest will be broadcast live via the internet on the North Allegheny Sports Network.