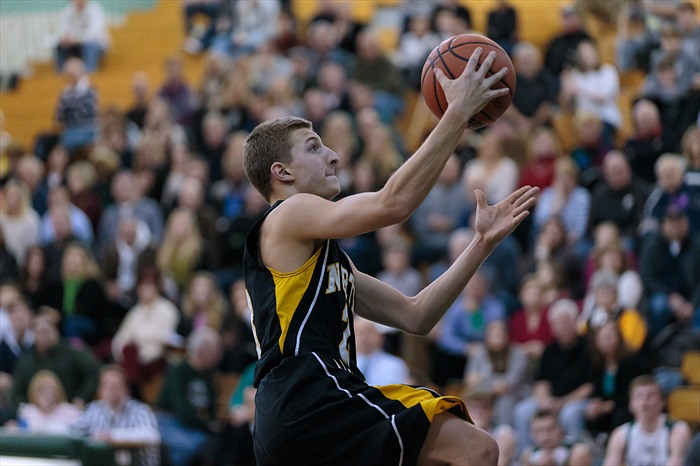 North Allegheny held off a furious second half rally by the Seneca Valley Raiders and claimed a 71-69 road win on Friday night to remain undefeated on the season. The Raiders held the basketball for the final shot of the game, but a three-point try by T.J. Holl at the buzzer was off-target as the Tigers outlasted their Section 3-AAAA foe for the two point victory.

North Allegheny raced to a 45-35 halftime lead thanks in large part to a hot first quarter by guard Joe Mancini.  The senior knocked down five three-pointers in the first period to jump start the Tigers shooting from beyond the arc. Mancini ran into foul trouble however and ended the night with 15 points. Collectively, North Allegheny hit 10 of 20 from beyond the arc in the opening half and 50% from the field.

The Tigers expanded their lead to 18 points in the third quarter, but a 16-0 run by the Raiders trimmed the NA advantage to 55-53. North Allegheny held the lead from the onset until midway through the fourth quarter when senior Mike Smith sank two free-throws to put the Raiders in front, 65-63.  The lead was short-lived however as Mike Carter sank a critical three-pointer to pull NA ahead, 66-65. Carter’s trey was followed by a three-pointer by David Haus moments later to increase the Tigers lead to 69-65 with two minutes to play.

Seneca Valley’s Matt Darby scored a two-point bucket with a minute to play to cut the score to 69-67, but Carter once again responded for the Tigers with two free-throws for a 71-67 lead. A lay-up by Smith trimmed the Raiders deficit to two points and a turnover by North Allegheny set the stage for the game ending shot by SV.  With time running down, Darby held the basketball until the waning seconds and passed the ball to Holl who let loose a desperation three-point attempt that missed its mark and the Tigers outlasted Seneca Valley for a 71-69 victory.

With clutch shooting, Carter was the top scorer for North Allegheny with 16 points.  Cole Constantino notched 13 points and Haus finished with 11.  For Seneca Valley, Smith tallied a game-high 20 points and Darby collected 17 points and seven steals.

North Allegheny jumps to 6-0 overall with the win and 3-0 in section play.  Seneca Valley falls to 5-2 overall and 2-1 within the section. The Tigers take on North Catholic next Thursday at the Gateway Classic at 3:45 pm. The Raiders will take part in the Montour Holiday Tournament starting next Friday.