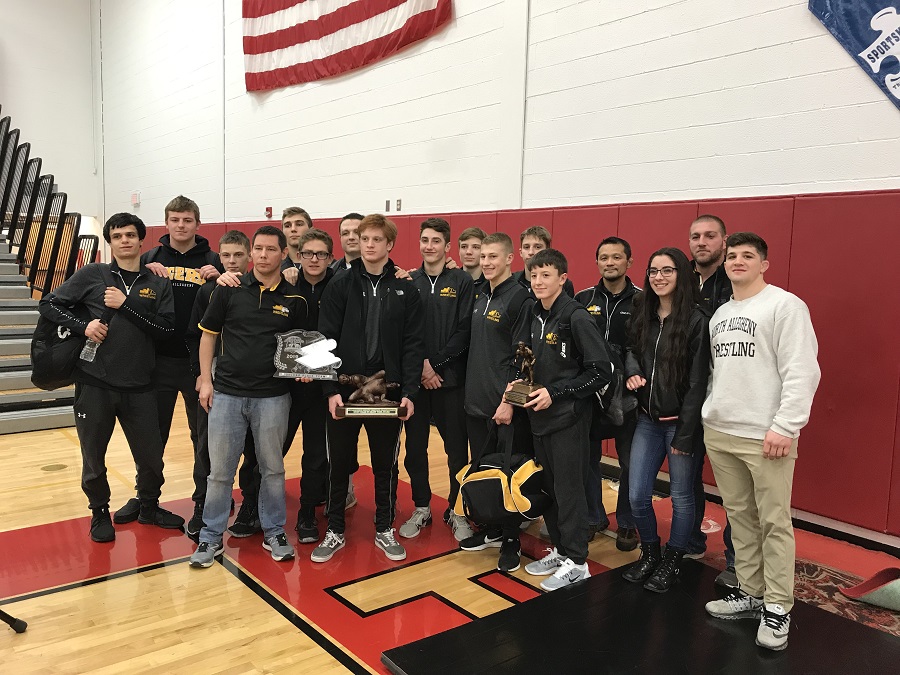 In a final tune-up before the Section 3-AAA Team Tournament on Wednesday, the North Allegheny wrestling team claimed a second-place finish at the prestigious Allegheny County Tournament this weekend. The Tigers totaled a team score of 168, finishing narrowly behind team champion Thomas Jefferson, who tallied 170.5 points.

The Tigers crowned one individual champion at 170 pounds as senior Jon Hoover dominated the competition with five pin falls, including a win by fall in just 37 seconds over Collin Milko of Carlynton in the title bout. Hoover received the award for Most Falls in the Least Amount of Time with five falls in 2:59. In the process, Hoover also collected his 100th career win.

Five NA grapplers earned bronze medals at the tournament. Freshman Dylan Coy placed third at 106 pounds with a win by fall over Tyler Diggins of Moon. Sophomore Brad Stipetich claimed third at 113 pounds with a 2-1 decision over Khyvon Grace of Moon. Junior Freddy Junko notched a 3-2 decision over Eddie Huehn of Carlynton in the third-place bout at 126. Sophomore Max Stedeford defeated Justin Perkins of Penn Hills by a 3-2 decision for third place at 132. At 220 pounds, junior Ben Grafton earned a 4-3 decision over Ed Farrell of Fox Chapel for bronze.

Adding to the North Allegheny point total, Ian Branstetter placed seventh at 138 pounds and Bobby Snyder took seventh at 152. For a look at the entire set of brackets from the Allegheny County Tournament, click here.