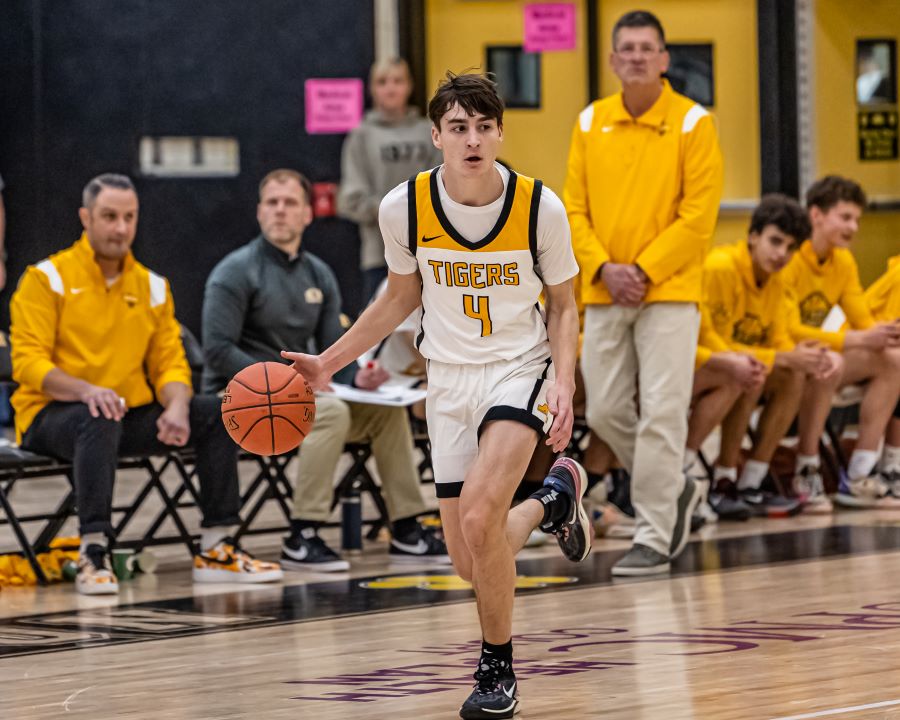 The North Allegheny boys’ basketball team knocked off the top-ranked team in Class A, the Imani Christian Saints, on Tuesday night with a 71-66 win at the Wright Automotive Holiday Tournament.

The Tigers trailed 17-15 after one quarter but were able to sink the Saints with a barrage of 3-pointers. North Allegheny buried 14 shots from beyond the arc, including five from junior guard Anthony Sciote on his way to a game-high 24-point effort.

Leading 45-44 in the third quarter, North Allegheny used a 14-0 run to take a 59-44 lead by the early stages of the fourth. The run included a 3-pointer by junior Jackson Howard to end the third quarter and a trey by junior Joe Marquis to start the fourth. The 14-0 run was capped on a runner by junior forward Joey Dopirak. After a basket by Imani Christian’s Dame Givner cut the score to 59-46, Sciote immediately answered by banking in a 3-pointer for a 62-46 advantage with 6:03 remaining in the fourth quarter.

Following an Imani Christian timeout, the Saints came marching back into the game, sparked by a trapping defense and sharpshooter Avery Wesley. Wesley netted a pair of 3-pointers and Givner added seven points in the final stanza to trim the NA lead to 69-66 in the final minute of the game. Wesley finished with 11 points and Givner netted a team-high 21 points.

Down by three points, Imani Christian had the ball with 11 seconds remaining and one final chance to tie the score. The Saints’ last-ditch possession was derailed on a tipped pass by Marquis that deflected into the waiting arms of Sciote, who was fouled with one second to play. Sciote made two free-throws to put the game on ice and the Tigers claimed a 71-66 victory.

Along with his timely deflection on the final defensive possession of the game, Marquis was a consistent source of offense at the perimeter and knocked down four 3-pointers in a 14-point performance. For his effort on both ends of the floor, Marquis was named the Wright Automotive Player of the Game.

Joining Sciote and Marquis in double figures was junior Ty Iwanonkiw, who added 14 points and a trio of treys.

With a second consecutive victory, North Allegheny improves to 2-4 overall, while Imani Christian drops to 1-4 on the season. The Tigers will host Franklin Regional at 7:30 p.m. on Wednesday night. The game will be broadcast live by the North Allegheny Sports Network.