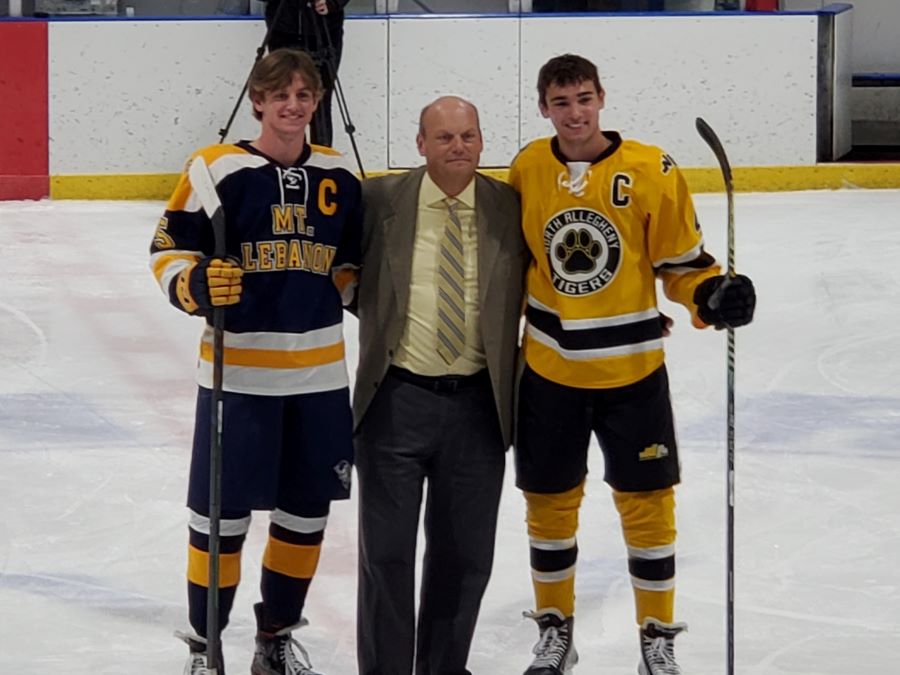 After a tough start to the game, the North Allegheny Ice Hockey scored four third-period goals to rally back and beat Mt. Lebanon 4-1 at the Bariel Ice Complex Thursday night.

Both teams started slow in the opening frame, but Mt. Lebanon got the early advantage off a goal from senior Matt Gates with 27 seconds left in the first.

North Allegheny had better shots and more chances in the second period while taking over the pace of the game. Senior goalie Rylan Murphy was strong in net after multiple Lebo chances in the middle frame. Senior defenseman Trey Gallo thought he had the equalizer late in the second period, but it was disallowed by the officials at the end of the play.

Gallo didn’t waste time to make the difference after the intermission, scoring on a feed from senior forward Luke Evans less than five minutes into the third period. About three minutes later, senior forward Matt Irvin scored on a goal assisted by senior defenseman Evan Barnhart giving the Tigers a lead for the first time this season. NA cashed in on a power play opportunity late in the contest, as sophomore defenseman Travis Lamark took a beautiful hesitation feed from Gallo and Irvin to earn the insurance marker. Senior forward Brett Baker also scored in the closing minutes assisted by Irvin, who earned Wright Automotive Player of the Game laurels for his 3-point performance. Murphy made 22 saves in the contest.

Former North Allegheny head coach Mike Bagnato was awarded the Bob Austen Award for distinguished coaching at the NA Athletics Hall of Fame Banquet earlier in the evening, and was celebrated with an on-ice ceremony before the contest.

The Tigers improve to 1-0 on the young season, and are in action next Thursday at the Alpha Ice Complex for a road matchup with the Central Catholic Vikings.