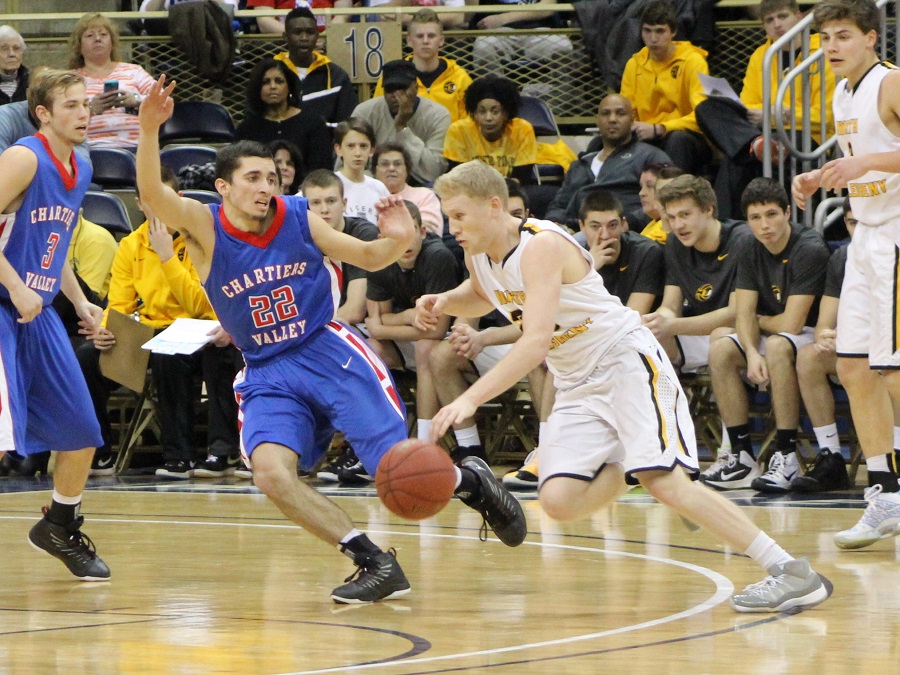 A strong second half by Chartiers Valley propelled the Colts to a 78-67 win over the North Allegheny Tigers in the WPIAL Championship Game on Saturday night from the Petersen Events Center. The Tigers led by ten at the half, but the Colts shot 76 percent in the second half to gallop to their first WPIAL title since 2010.  The Tigers were making their first title game appearance since 1999 and were vying for their first ever boys basketball crown.

North Allegheny stormed out of the gates in the first half and took a 22-9 lead in the first quarter behind a barrage of 3-pointers. Seniors Will Sandherr and Mike Fischer, and junior Keegan Phillips helped shoot the opening salvo with two treys apiece to build a healthy lead.  Senior Cole Constantino joined in the fun in the second quarter with two 3-pointers of his own to help North Allegheny to a 43-33 lead at intermission.  The Tigers were 8 of 13 from beyond the arc in the first half and outrebounded the Colts, 23-7.

The WPIAL championship was a complete role reversal in the second half as Colts rarely missed a shot and stampeded toward victory.  Chartiers Valley outscored NA 24-6 in the third quarter and traded buckets with the Tigers in the fourth period on its way toward victory.  The Colts shot 82 percent in third quarter and poured in 16 of 21 attempts from the field in the entire second half. CV also outrebounded the Tigers 18-6 in the second half.

The pace setter for the Colts was the WPIAL’s leading scorer and Robert Morris recruit, Matty McConnell, who netted a game-high 34 points.  McConnell reached the 2,000 point milestone for his high school career with a half-court buzzer beater to end the third quarter and to give Chartiers Valley a 57-49 lead.

The Tigers tried to claw back in the fourth quarter but could come no closer than six points of CV at 62-56.  Chartiers Valley, who fell in the WPIAL finals the last two season in Class AAA, finished off the Tigers in the final stanza for a 78-67 win.  Along with McConnell, Eddie Flohr totaled 24 points and Joe Antonucci tallied 14 points.

North Allegheny was led by the steady hand of Constantino who scored a team-high 27 points on 9 of 18 shooting.  Constantino was named the Wright Automotive Player of the Game.

Chartiers Valley improves to 23-3 on the season while North Allegheny slips to 23-3.  Both teams will continue their seasons on Saturday in the opening round of the PIAA playoffs.

(Photo of Will Sandherr driving against Eddie Flohr by Kristen Gore)