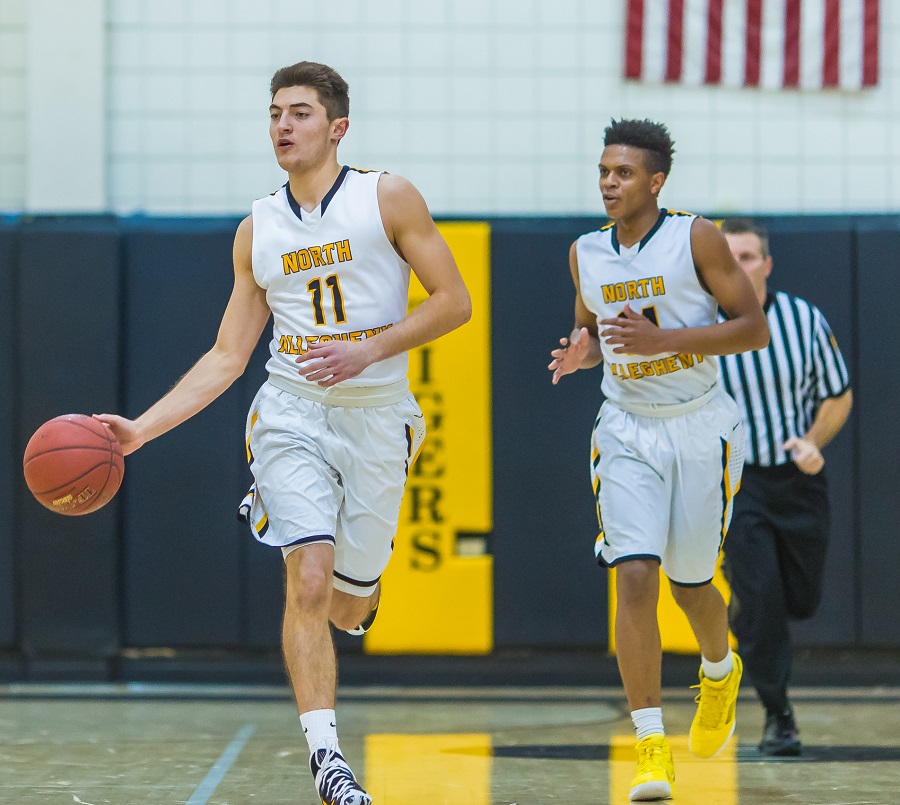 North Allegheny used lights-out shooting from beyond the arc and a dominating effort on the glass to deliver a landslide, 88-58, win over the West Allegheny Indians on Tuesday afternoon at the Wright Automotive Holiday Tournament. The Tigers outrebounded the Indians, 45-28, and hit at a 60-percent (9 of 15) clip from the outside. Junior guard Curtis Aiken was named the Wright Automotive Player of the Game with a game-high 22 points.

Aiken and senior Luke Carter helped NA take a firm hold of the contest in the first half with their 3-point shooting prowess. For the game, Aiken buried 4 of 6 shots from beyond the arc and Carter connected on 3 of 5 attempts for a 13 point effort.

The Tigers held a 48-27 lead at the half and continued to bury the Indians by controlling the paint. Senior Isaac Barnes tallied a double-double with 19 points and 13 rebounds. Junior Zach Johnson also posted a double-double off the bench with 18 points and 10 rebounds. The efforts of Barnes and Johnson in the second half turned the game into a runaway as NA captured an 88-58 triumph.

North Allegheny improves to 3-3 overall with the win. West Allegheny remains winless at 0-7 on the season. The Tigers will host Sewickley Academy, one of the top teams in Class AA, on Wednesday at 8:00 p.m as the Wright Automotive Holiday Tournament continues. The game will be broadcast live via the internet on the North Allegheny Sports Network.