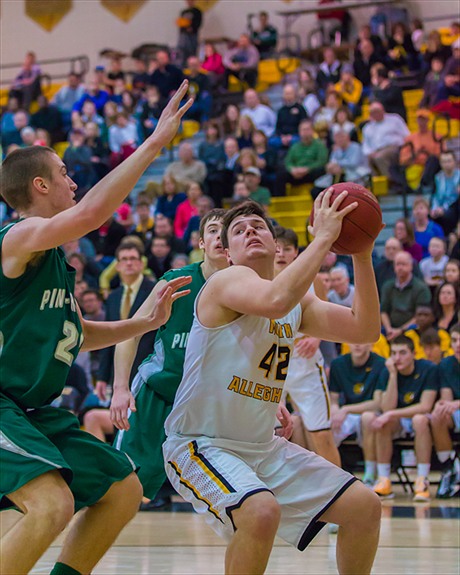 The North Allegheny boys’ basketball traded barbs with the top-ranked team in Class 6A but in the end the Pine-Richland Rams were able to outlast the Tigers by a 49-46 decision on Friday night. Seniors Andrew Petcash and Evan Luellen netted 13 points apiece for the reigning WPIAL champions. North Allegheny was paced by Curtis Aiken and Isaac Barnes who scored nine points each.

Pine-Richland preached patience in their offensive sets and did its best to spread out the NA defense for open looks. That strategy, and the perimeter shooting of Luellen, helped the Rams build a 30-20 lead by intermission.

The Tigers roared back with an 11-1 run to even the score at 31-31 with 4:20 left in the third quarter.  The NA spurt was sparked by a layup from Griffin Sestili and continued with a 3-pointer by Luke Carter and a layup by Aiken. Following a 1 for 2 trip to the free-throw line by PR’s Petcash, the Tigers continued the run with back-to-back layups by Barnes to tie score at 31-31.

Despite the strong start to the second half, the Tigers could not overtake the Rams and PR immediately answered with a 3-pointer by Luellen to regain the lead at 34-31 with 4:06 remaining in the third period. North Allegheny kept the game tight throughout but ultimately fell short as the Rams staved off the Tigers for a 49-46 win.

During NA’s comeback bid in the second half, North Allegheny forward Griffin Sestili supplied some momentum gaining plays, taking charging fouls from Pine-Richland players that barreled into the paint. Adding six points and three rebounds to his stat line, Sestili was selected as the Wright Automotive Player of the Game.

Following the loss, North Allegheny slips to 2-3 overall and 1-1 in Section 1-AAAAAA. Pine-Richland remains undefeated at 5-0 overall and 1-0 in section play. The Tigers will return to the hardwood on Tuesday at 3:00 p.m. against West Allegheny at the Wright Automotive Holiday Tournament. The game will be broadcast live via the internet on the North Allegheny Sports Network.