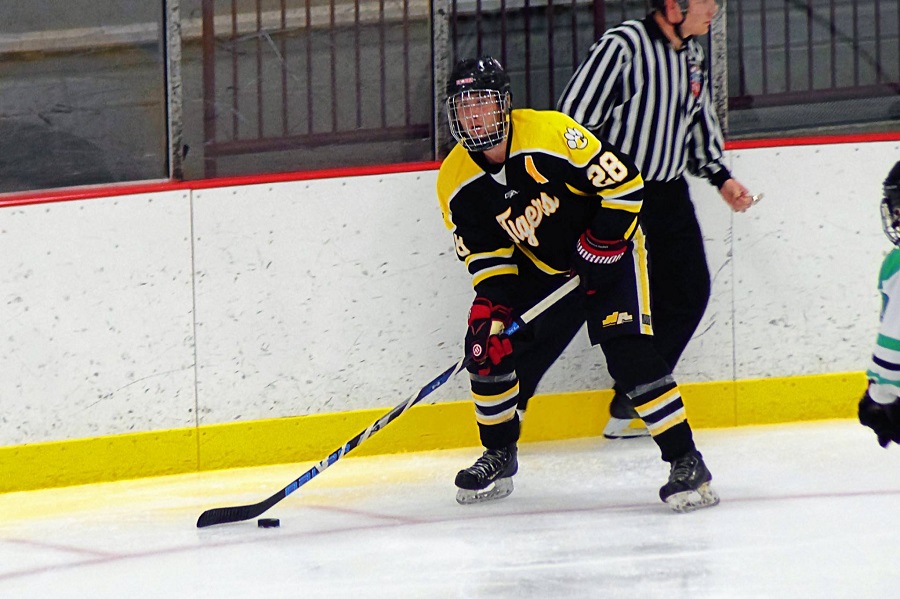 Junior Tyler Putnam broke open a 2-2 deadlock with three straight goals to propel North Allegheny to a 5-2 victory at Butler on Monday night in the regular season finale. Putnam’s hat trick gives him 10 goals on the season, second best on the team. The win vaults North Allegheny into first place in the PIHL Class AAA standings by one point. Second-place Peters Township plays third-place Bethel Park tonight to decide the top three seeds in the upcoming PIHL playoffs.

The game was knotted up at 1-1 through one period, thanks to goals from Butler’s Bennett Thrash and North Allegheny’s Aaron Miller. Miller’s goal was his team-leading 12th on the season.

In the opening minutes of the second period, junior Will Parreaguirre scored to give NA a 2-1 lead. Butler answered back and tied the game at 2-2 at the 3:49 mark of the period. That set the stage for Putnam’s heroics.

Putnam’s first goal came with 7:02 left in the second period to give the Tigers a 3-2 advantage. Putnam tacked on two more goals in the third period to put away a 5-2 triumph over the Golden Tornado.

In net, senior goalie Richard Karapandi stopped 20 shots to earn his 12th victory of the season. Butler’s Connor Stroebel made 31 saves in a losing effort.

North Allegheny improves to 14-4 on the season and sits atop Class AAA with 28 points. The Tigers will await the outcome of the Peters Township-Bethel Park game to determine their seeding in the PIHL playoffs.