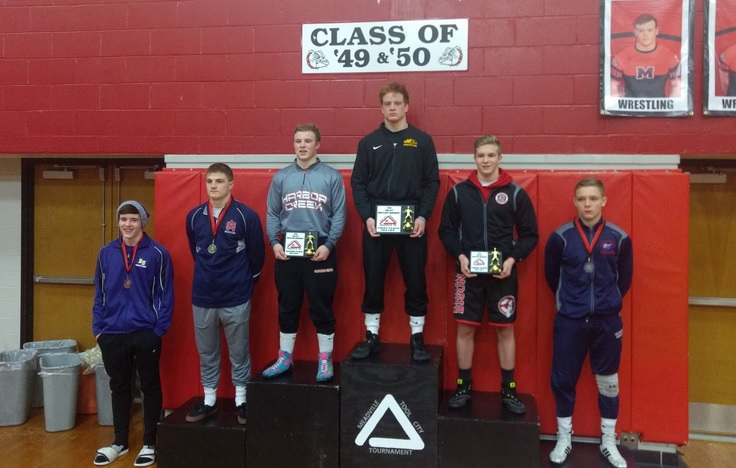 North Allegheny placed four wrestlers at the 39th annual Tool City Wrestling Tournament this weekend at Meadville High School, including a first-place performance by junior Jon Hoover at 160 pounds. Hoover was the No. 4 seed in the bracket and defeated Jacob Lloyd of Fort Le Boeuf by a 9-1 decision, Hunter Wright of Clearfield by a 10-4 decision, and top-seeded Jake Pollack of Shaler Area by a 7-2 decision on his way to the title bout. For 160 pound gold, Hoover took down second-seeded J.T. Bratt from Harbor Creek in a 3-1 decision.

Hoover’s performance helped the Tigers tally a team score of 106, good for 10th place at the tournament. Section rival Seneca Valley won its first ever Tool City Tournament title with a team score of 244. For a complete look at the Tool City Wrestling Tournament bracket, click here.

Along with Hoover, NA senior Jacob Downing took home a bronze medal at 126 pounds with a 4-2 decision over third-seeded Jason Geyer of Seneca Valley in the third-place bout.

Freddy Junko was the No. 4 seed at 120 pounds and toppled Peyton Smay of Clearfield with a win by fall and defeated Alex Kightlinger of Saegertown, 4-0, to reach the semifinals. Junko’s impressive run in the winner’s bracket came to an end in the semis as the NA sophomore fell to top-seed and eventual champion Louis Newell of Seneca Valley before ultimately  taking fourth place in the weight class. Newell, a three-time PIAA medalist, became the seventh wrestler in tournament history to win four straight titles.

At 145 pounds, sophomore Nick Marcenelle claimed sixth place with a terrific run through the consolation bracket. Marcenelle defeated Caleb Freeland of Clearfield, 5-1, and Bradley Motter of General McLane, 3-1, on his way to a sixth-place showing.

The North Allegheny wrestling team returns to section action on Wednesday night with a home match against the Shaler Titans. You can listen to all the action via the internet on the North Allegheny Sports Network.