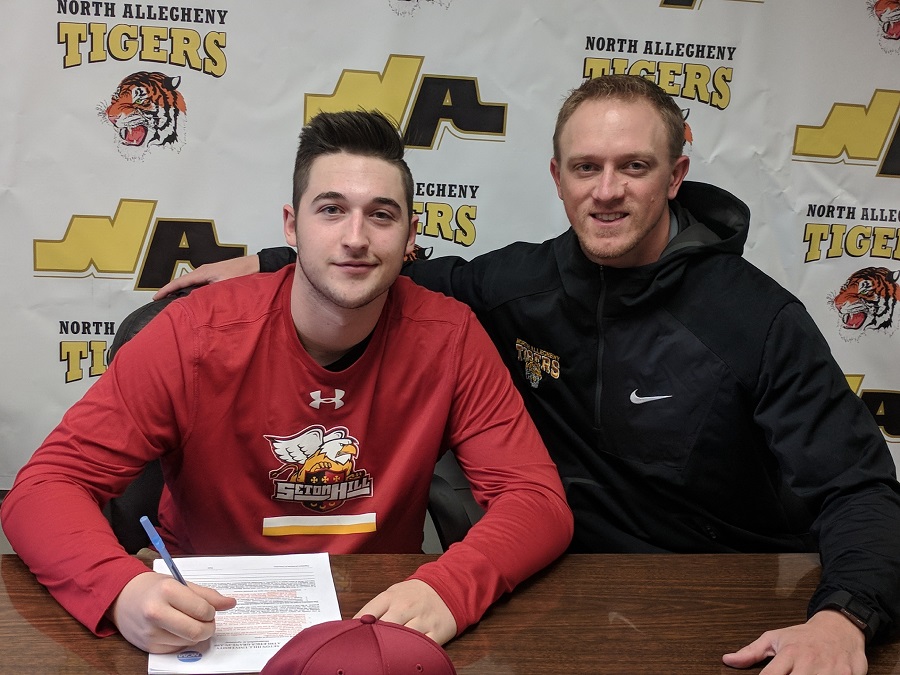 North Allegheny senior Caiden Wood will play collegiate baseball at Division II Seton Hill University. Wood made a verbal commitment over the summer but made his choice official by signing his official letter of intent this week.

As a junior in 2017, Wood posted a .240 batting average with nine RBI and six runs scored. A slick-fielding corner infielder for the Tigers, Wood also saw time on the mound making six relief appearances. A reliable late-inning arm, Wood notched three saves in 7.2 innings of work while permitting only three earned runs and collecting seven strikeouts. He not only helped North Allegheny to an appearance in the WPIAL title game and PIAA playoffs last season, but also captured All-Big 56 Conference honorable mention accolades.

Wood still has one more season as a member of the Tigers in the spring of 2018, but when he steps on the campus of Seton Hill University he’ll join an NCAA Division II baseball powerhouse. Last spring, the Griffins won the PSAC championship and appeared in the NCAA D-II Atlantic Regional. Seton Hill has had much success with North Allegheny products in the past. Namely former Tiger Nick Sell who won the Tino Martinez award in 2015, which is awarded to the most outstanding player in Division II.

Wood will study education at Seton Hill with an emphasis on secondary education and history.