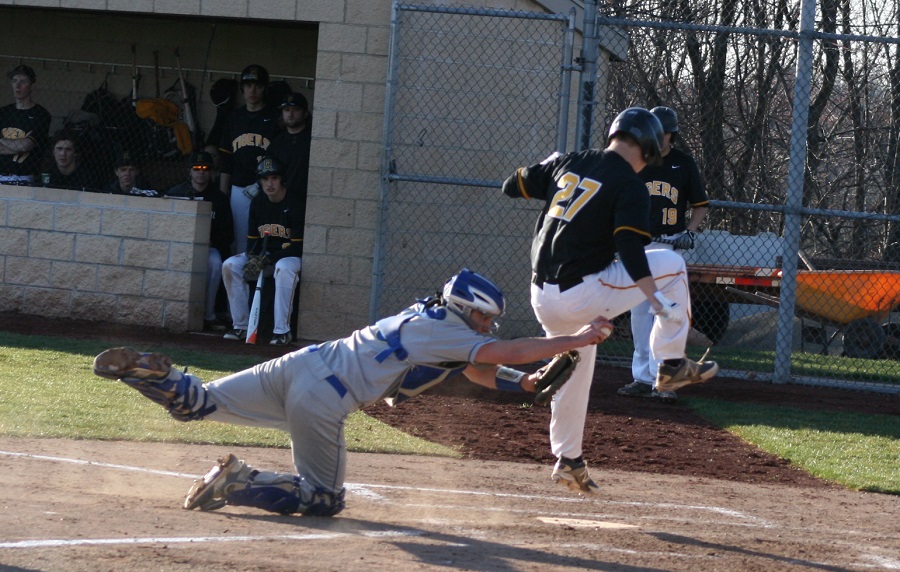 The North Allegheny baseball team began its spring trip to Florida in grand fashion with a 6-4 victory over St. Charles High School (OH) on Friday. The Tigers grabbed the lead early with a four-run first inning and held off St. Charles thanks in part to the pitching of Trevor Smith. The NA senior tossed five innings and struck out seven batters to earn the victory. Reliever Keegan Phillips pitched the Tigers out of a potential jam in the seventh inning to preserve the 6-4 win.

North Allegheny struck quickly in the first inning and took a 1-0 lead on a Phillips RBI single that drove in junior Alex Mesaros. Jon Dignazio followed with an RBI single to make it 2-0, Tigers, and a two-run error by St. Charles later in the inning paced NA to a 4-0 advantage.

St. Charles cut the score to 4-2 with two runs in the top of the fourth but the Tigers got one run back in the bottom of the fourth for a 5-2 lead when Jake Fischbaugh scored on a fielder’s choice ground ball by Mesaros.

The NA lead was trimmed to 5-4 when St. Charles scored single runs in the fifth and six innings, however, the Tigers expanded the lead to 6-4 courtesy of a wild pitch that scored Dillan Layman.

Things got sticky for North Allegheny in the top of the seventh as St. Charles put two men on with one out thanks to a single and walk. Phillips took the bump in relief for the Tigers and squashed the uprising by inducing a groundout and lineout to end the ball game for a 6-4 triumph.

North Allegheny improves to 2-1 overall on the season and will continue with its Florida trip this weekend.