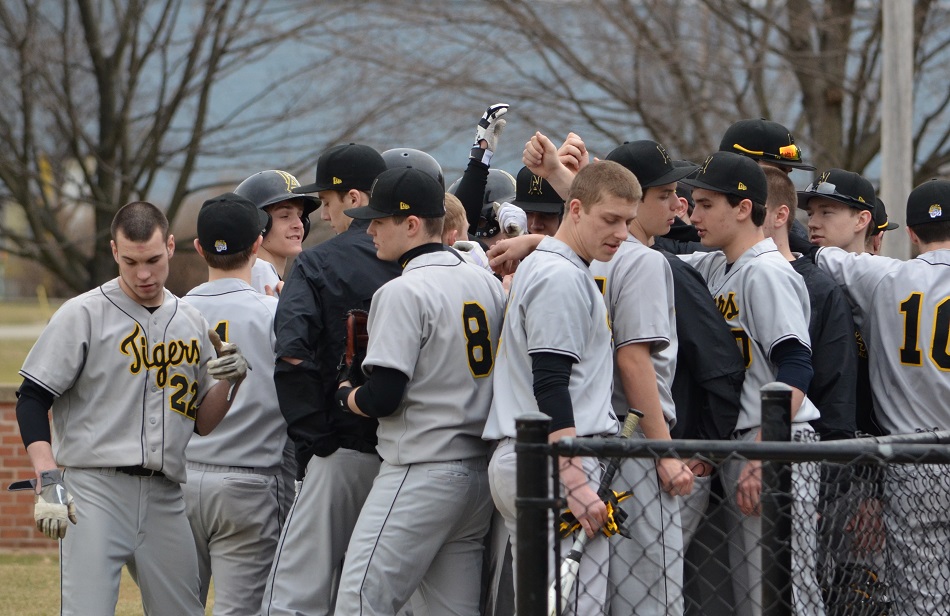 In a hitting showcase, the Norwin Knights outslugged the North Allegheny Tigers on Tuesday afternoon, 14-10. The Tigers trailed 11-0 before mounting a late-game comeback. NA scored five runs in the top of the seventh, but the rally fell four runs short in a game that featured 26 hits and four home runs.

Arizona recruit J.J. Matijevic hit two home runs and paced the homestanding Knights with five RBI’s. It was Matijevic’s first home run of the day, a two-run shot, which pushed Norwin’s lead to 11-0 in the third inning.

Undaunted, North Allegheny chipped away at the Knights advantage by scoring runs in each of the next four innings. The Tigers struck for two runs in the fourth inning and added two more in the fifth when senior Nick Norwig drove home Dan Trettel and Matt Muslin with a two-out single. NA trimmed the Norwin lead to 11-5 in the top of the sixth when Mitch Machi trotted home on a fielder’s choice ground ball by Trettel.

The Knights seemed to douse the Tigers rally in the bottom of the sixth inning with a two-run homer by Nick Palo and a solo homer by Matijevic, increasing the Norwin advantage to 14-5.

However, Machi reignited NA in the top of the seventh with a grand slam, his second homer of the season, to pull the reigning WPIAL champions to within five. Later in the inning, Brandon Rossier drove home the Tigers 10th run with a sacrifice fly that plated Luke Zahren to bring the score to 14-10, Norwin.  Rossier’s sac fly accounted for the second out of the seventh, and with two runners aboard Norwin’s Nick Palo buckled down for the final out as the Knights held off the Tigers for a four-run victory.

North Allegheny falls to 1-1 overall with the non-section loss.  Norwin improves to 3-1 overall.  Weather permitting; the Tigers are scheduled to visit Gateway Wednesday afternoon at 4:00 pm in another non-section affair.