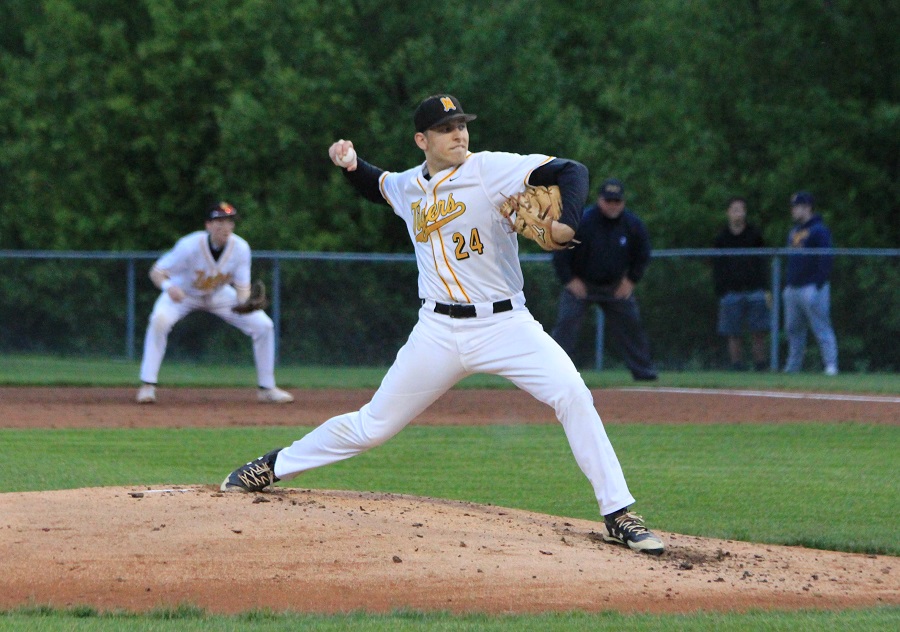 North Allegheny won the 6A Section 1 championship outright, while Hempfield split the 6A Section 2 title with Norwin, so this game was a match-up of two of the top teams in the classification. The Tigers scored three runs in the first and added two more in the second inning to take a 5-0 lead, only to have the Spartans answer with five runs in the top of the third. But the resilient Tigers responded with five runs of their own in the bottom half of the third on the way to a 12-5 win in Wexford.

The offense was spread throughout the lineup for the Tigers in the victory. Leadoff hitter Ethan Gavlik went 2-for-3 with two runs scored and a pair of stolen bases. Logan Andreyko had two hits including a double and drove in two runs. Cole Young drew a pair of walks, one with the bases loaded, and added a run scored and a stolen base, but the Duke commit was surprisingly the only Tigers starter to not record a base hit. Danny Gallon had two hits and two RBI’s, Joe Manesiotis added a single and an RBI while catcher Aaron Posey had the biggest hit of the game for North Allegheny.

After Hempfield tied the game at 5-5, the junior Posey hit his first homerun of the season to left field, which gave the Tigers the lead back at 6-5, a lead they would not relinquish. Posey also scored twice on the night. Aaron Galaska singled, scored a run and added a run batted in while Erik Sundgren added a single and a run scored from the ninth spot in the batting order for NA.

Despite getting twelve runs and twelve hits, the choice for the Wright Automotive Player of the Game went to a pitcher for the Tigers. Kyle Demi was dominant in relief for North Allegheny in picking up his seventh win. The senior faced fifteen Hempfield batters, allowed one hit and three walks, but struck out 10 batters, including a stretch where he fanned five straight Spartans.

The win improved the Tigers overall record to (16-2) with non-section games at home against Penn-Trafford and on the road versus Upper St. Clair remaining before the playoffs begin next week.