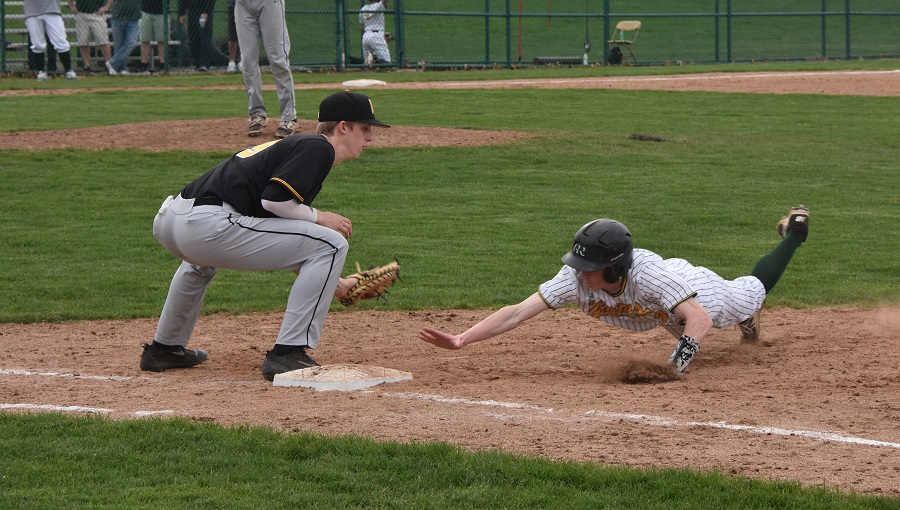 The North Allegheny baseball team dropped a 5-4 decision on the road to rival Pine-Richland on Wednesday afternoon. The top-ranked Rams rallied from a 4-0 deficit, keyed by a three-run double by Vanderbilt commit Troy LeNeve in the third inning, to claim the Section 1-6A victory.

The fifth-ranked Tigers struck for the game’s first run in the top of the second inning when Anthony Hattrup’s sacrifice fly brought home Cole Young from third base for a 1-0 lead.  In the top of the third inning, North Allegheny was able to open up a 4-0 lead thanks to three consecutive RBI doubles from Jared Orwell, Ryan Dougherty and Young. Orwell and Young finished with two-hit days.

Pine-Richland mounted a comeback in the bottom of the third inning that was sparked by LaNeve’s bases loaded double that trimmed the NA lead to 4-3. Moments later, LaNeve trotted home on an RBI double by Josh Johnson to even the score at 4-4.

Pine-Richland scored the go-ahead run in the bottom of the fourth inning on a North Allegheny error to pull ahead, 5-4.

After allowing four runs to the Tigers in the first three innings, Pine-Richland starter Matt Schietroma settled down and blanked NA in innings four and five. Reliever Josh Scherer took the ball from there and tossed two shutout innings to secure the victory and earn the save. Schietroma struck out nine and walked one in five innings to pick up the win.

North Allegheny starting pitcher Kevin Schott was saddled with the loss, allowing five runs (four earned) in five innings. Schott struck out four while walking a pair. Hattrup worked one scoreless inning out of the bullpen.

With the loss, North Allegheny dips to 7-5 overall and 3-2 in Section 1-6A. Pine-Richland remains undefeated in the section at 5-0 and sits at 10-3 overall. The Tigers look to rebound on Thursday night with a non-section home game against Hempfield. The contest, which is a playoff rematch from last season, will be broadcast live via the internet on the North Allegheny Sports Network.