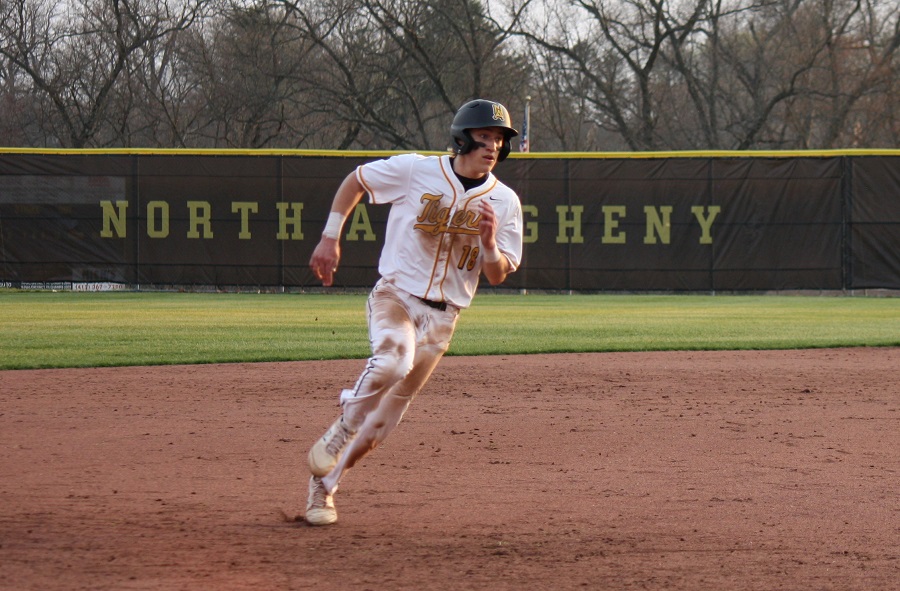 NA Runs Away From Allderdice For 11-1 Section Win

The North Allegheny baseball team won its fourth consecutive game on Tuesday night by dispatching the Allderdice Dragons, 11-1, in five innings in Section 1-6A action.

NA capitalized on three Allderdice errors as the Tigers bats stayed hot following Monday’s 19-run outburst. Tied 1-1 in the bottom of the second inning, Aaron Galaska belted a two-run single to right field to score Drew Dougherty and Spencer Barnett for a 3-1 lead.

A pair of sacrifice flies by Aaron Posey and Barnett helped expand the NA lead to 6-1 in the third inning and a sloppy fourth inning by the Dragons’ defense and pitching staff contributed to a five-run bottom of the fourth inning.

Danny Gallon went 2 for 2 with two RBI and two runs scored to pace the lineup. Cole Young stroked a double, scored two runs and drove in a pair, while Galaska also posted two RBI on the day. Logan Andreyko contributed with a walk, a double and scored two runs. Overall, 10 Tigers either scored a run or drove in a run for another strong performance up and down the lineup.

On the mound, Kyle Demi (3-0) got the start and earned the victory with three innings, giving up only one unearned run on two hits. Demi struck out six and walked one. Connor Smith pitched two scoreless innings with four strikeouts and a walk.

With the win, North Allegheny improves to 6-1 overall and 3-1 in Section 1-6A. Allerdice remains winless at 0-5 overall and 0-4 in the section. The Tigers will host Mt. Lebanon on Thursday night at 7:00 p.m. The game will be broadcast live via the internet on the North Allegheny Sports Network.