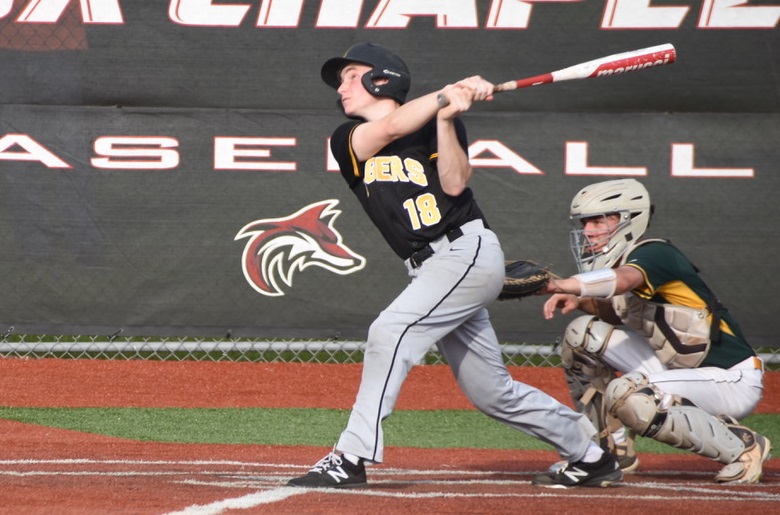 After defeating Penn-Trafford 6-0 in the WPIAL playoffs a year ago, it was the Warriors that got their revenge in the WPIAL semifinals topping North Allegheny, 7-2. A four-run fifth inning and a complete game were the catalysts behind Penn Trafford’s win snapping the Tigers nine-game win streak.

North Allegheny got the scoring started in the second inning when Cole Young led the inning off with a double and then Shane Murphy came through with a huge two-out RBI single to give the Tigers a 1-0 lead. Penn-Trafford tied it up in the fourth inning when opposing pitcher Tyler Horvat led off with a single and scored on Luke Fabac’s RBI triple. North Allegheny did a great job limiting damage as the Warriors had a man on third with no outs and starter Ryan Partridge was able to work out of trouble, getting back-to-back strikeouts and a groundout keeping the game at 1-1.

The fifth inning is where Penn-Trafford took control of the game. Penn-Trafford got the inning started by reaching on an error and stealing second. This was followed by an RBI single, then with two outs in the inning Mario Disso hit one just fair down the left field line for a two-run triple and scored on a throwing error making the game 5-1, Warriors, after five innings.

Penn-Trafford was able to get two more runs in the bottom of the sixth, making the score 7-1. North Allegheny continued to fight, getting one more run in the seventh when Murphy once again hit an RBI single driving in Ryan Dougherty and that’s where the score would stay with Penn-Trafford winning 7-2 and advancing to the WPIAL Championship.

Partridge went 5.2 innings allowing five hits, five earned runs and striking out eight. Murphy was the Wright Automotive Player of the Game going 2 for 3 with two singles and two RBI.

Penn-Trafford improves to 18-3 and will take on Pine-Richland in the WPIAL Championship. The Tigers fall to 16-6 on the season but will have another game to play. NA will play Bethel Park in the state play-in game on either Tuesday or Wednesday at a site and time to be determined. Stay up to date right here on the North Allegheny Sports Network for updates on date, site and time of the state play-in game.